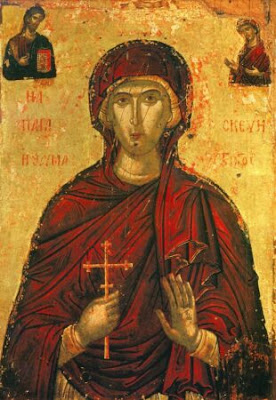 By Paraskevas Lambropoulos
During the Turkish occupation, in a small church, the Turkish occupiers did not let the priest liturgize.
They would go and do dirty things inside the church and on Sundays they would guard it and sought to kill him.
But Saint Paraskevi offered guidance to the priest while he was sleeping, that he should go ring the bell, because when he rang the bell, they would not bother him afterwards.
But one Sunday, when he was about to be killed by those Turks, the troubled priest said in his prayer to the Saint:
"I can not anymore, my Saint, I can not!"
She then appeared in his sleep and said to him:
"You go and ring the bell and I will go to the city to bring back cholera to eradicate them" [perhaps in the city there was a similar epidemic].
And, as the Elders narrate, only the Turks fell ill with cholera, and slowly they died one after the other.
Then the villagers realized the miracle.
Because the Turks were unbaptized, they were not buried in the Christian cemetery. They were taken, below the village, to a deserted place.
When I was twelve years old, this place sank and the Turkish bones were exposed.
The location is called "Turkomnimata".
Source: From the book My Experiences from Saint Porphyrios, 2015. Translated by John Sanidopoulos.
John at 2:08:00 PM
Share
‹
›
Home
View web version