Saint Marcellina was born in Trier, Gaul around the year 330 into a Roman Christian family. Her father served as Praetorian prefect of Gaul. The sister of Ambrose of Milan, she was older than her two brothers. About the year 354 Ambrosius, the father, died, whereupon the family moved to Rome. It appears that after the death of their parents, she took responsibility for the upbringing of her younger brothers, Ambrose and Satyrus.
As the eldest sister in her family, she made it a point to pass on to her younger brothers the "desire not to express their virtue, but to become truly virtuous." She taught them that nobleness of blood cannot enhance merit, nor make men more illustrious unless they despise it; and that learning is an unpardonable crime and folly, if by it a man should desire to know every thing that is in heaven and earth but himself; for with the true knowledge of ourselves are all our studies to begin and end, if we desire to render them in any degree advantageous to ourselves. 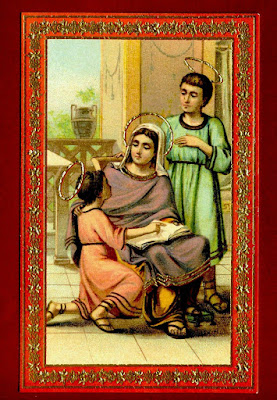 She devoted herself to the practice of piety and asceticism, and was tonsured a nun by Pope Liberius in Saint Peter's Cathedral on Christmas day in the year 352. The Pope, in a short discourse on that occasion, exhorted her frequently to love only our Lord Jesus Christ, the chaste spouse of her soul, to live in continual abstinence, mortification, silence, and prayer, and always to behave herself in the church with the utmost respect and awe. He mentioned to her the page of Alexander the Great, who, for fear of disturbing the solemnity of a heathenish sacrifice by shaking off his hand a piece of melted wax that had fallen upon it, let it burn him to the bone. 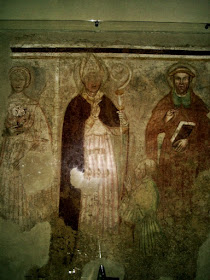 Marcellina in her practice went beyond all this. She fasted every day till evening; and sometimes passed whole days without eating. She drank only water. She never laid herself down to rest till quite overcome with sleep. The greater part both of the day and night she devoted to prayer, pious reading, and tears of divine love and compunction. Saint Ambrose advised her in the decline of her life to moderate her austerities, but always to redouble her fervor in tears and holy prayer, especially in reciting often the Psalms, the Lord’s Prayer, and likewise the Creed, which he calls the seal of a Christian, and the guard of our hearts. 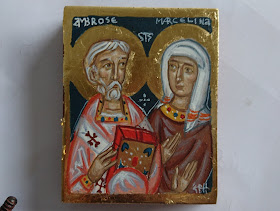 She continued at Rome after the death of her mother, living not in a nunnery but in a private house with one fervent virgin, the faithful companion of all her holy exercises. After Ambrose had become Bishop of Milan in 374, he summoned his sister, and found in her a zealous assistant in fostering and extending the ascetic life among the maidens of Milan. Ambrose dedicated his work on virginity, written in 377, Libri III de virginibus ad Marcellinam, to her. Two letters of Ambrose to his sister Marcellina have survived (Letters 20 and 22). Paulinus the Deacon, who wrote a biography of Ambrose at the request of Augustine of Hippo, learned the details of Ambrose's life from Marcellina.
Marcellina survived her brother by a year, dying in 398. Honored as a Saint, she was buried in the crypt under the altar of the Ambrosian Basilica in Milan.