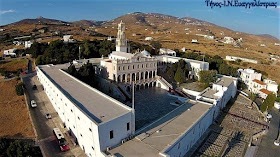 A year after the beginning of the Greek Revolution, in July of 1822, a nun named Pelagia from the Monastery of Kechrovouni on the island of Tinos had a vision of the Mother of God, telling her to dig in a certain location on the island where there was an icon depicting her. This dream was repeated three times until the nun Pelagia was convinced and appealed to the authorities, which organized the search for the icon in September of 1822. Excavations began under the supervision of Stamatelos Kangades and a few days later, the foundations of an ancient church dedicated to John the Baptist were found. Near the Holy Altar, a very old dry well was finally discovered, about twenty meters deep. No icon was found, however, so the quest ceased.
After the cessation of excavations, the island was hit by an epidemic of cholera. Then, as the fatalities were increasing, Stamatelos Kangades, who had promised to find the icon, realized that the plague was a punishment from God and that He would exterminate all the inhabitants of Tinos if they did not rebuild the church and find the icon. With this realization, he informed the Bishop and gathered the inhabitants who resumed their work with greater eagerness in order to stay the plague on November 25, 1822. Digging at the substructure of the old Christian church, on January 1, 1823 water sprang from the dry well in the area, an event that was considered a miracle. A new church was built there and dedicated to the Life-Giving Spring. While the excavations for the finding of the icon continued, on the 30th of January, the axe of a laborer from the village Falatados hit the icon, breaking it in two pieces, leaving the images of the Virgin Mary and the Archangel Gabriel unscratched.
The first recorded miracle of the newly discovered icon took place as follows. When the icon was discovered it was covered in an unknown material. It was silky and glasslike and looked like it was made of earth and water. It protected the icon acting like a shield through the ages and kept it unharmed. Only some days before, the first signs of the awful cholera disease had appeared on the son of George Peridis, who had worked on the excavation. To escape the illness his parents were obliged to leave their home and place their son into the hands of nurses. Now, when the Holy Icon was discovered, Peridis knelt before it, pleading for his son’s recovery. Then he took some of the solid matter that was still covering the icon, added some holy water and asked the nurses to rub his son with it. So this was done. In the morning, trembling with fear, he went towards his house to find out the news about the health of his son. All of a sudden, he saw his son coming towards him, completely cured. The overjoyed father went immediately to thank the Theotokos.

With the finding of the icon, the plague epidemic disappeared from the entire island immediately. The inhabitants of Tinos, then, were overwhelmed with sacred gladness and decided together to erect a beautiful church in the name of the Evangelistria. Within the same year, the magnificent church was built enthusiastically by the people.