Homily for the Sunday of the Holy Fathers of the Fourth Ecumenical Synod (Metr. Hierotheos of Nafpaktos) 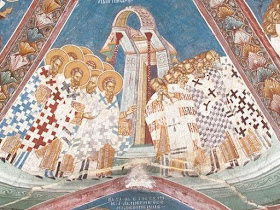 By Metropolitan Hierotheos of Nafpaktos
This Sunday is dedicated by the Church to the Holy Fathers who convened the Fourth Ecumenical Synod in Chalcedon in the year 451 AD, which confronted the heresy of Monophysitism. This is the heresy that claims that the two natures of Christ - divine and human - were united in one nature and in particular the human nature was absorbed by the divine nature. This view subverted the whole teaching of the Church, which maintains that the human nature is preserved in Christ even after its union with the divine nature.
The heresy of Monophysitism is a continuation of the great heresy of Arianism, which claimed that Christ is a creature and not God. The basis of these first heresies was that they tried to interpret the Person of Christ with logic. The important thing is that the heretics and all their like-minded people theologized using Greek philosophy and reflection, while the Fathers used the experience of the Prophets and Apostles, as expressed in Holy Scripture, but also as confirmed by their own spiritual, ecclesiastical experience. This is the basic difference between heretics and the Fathers. The heretics tried to interpret the relationship of the Father with the Word, and the relationship of the two natures in Christ, using philosophical presuppositions, while the Fathers knew from experience that the Word is God, because in His appearance to the Apostles and to them He shone like Light, like the sun. Thus, the Word has the same essence and energy as the Father and the Holy Spirit. Also, the union of the two natures in the Person of Christ became "unmingled", "unaltered", "indivisible" and "inseparable".
Indeed, during the Transfiguration of Christ on Mount Tabor, the three Disciples saw the face of Christ shining like the sun, and His robes white as light, and they heard the voice of the Father, who testified that Christ is His beloved Son, and they saw the Holy Spirit as a cloud of light. The archdeacon and first martyr Stephen before the council of the Jews saw the great glory of God and Christ being at the right hand of the Father. The Apostle Paul saw Christ in the Light, and in fact a Light whose brilliance surpassed that of the sun. This experience was experienced by the Prophets in the Old Testament, such as the God-seer Moses, but also by the God-bearing Fathers through the centuries. Before such an empirical theology no philosophy at all nor any reflection can stand. The Apostle Peter, who attended the Transfiguration of Christ on Mount Tabor, writes that he became an "overseer" of the majesty of God and did not know Him by "sophisticated myths", that is, by fairy tales which are presented with wise words, and, of course, this means ancient Greek philosophy, characterized as metaphysical (2 Peter 1:16-21).
The theology of the Church Fathers is empirical and not rationalism, it is expressed by eyewitnesses of the divinity of Christ and not by philosophers who use reflection and philosophy. The latter is a distinctive feature of heretics, who mix logic with mind, imagination with reality, philosophy with truth, reflection with Revelation. That is why we honor the Fathers of the Church as teachers without error, as great theologians, as bright stars of the noetic firmament, as flowers of Paradise, as golden mouths of the Word and many other expressions that we heard chanted today during Matins in church.
And this is important, because today there are many who distort the words of the Fathers, thinking that we live in another age, different from the time of the Fathers, so they talk about post-patristic theology, but also misinterpret them in a complicated way, so that they undermine them. These misinterpretations are harrowing, and in essence anti-ecclesiastical, since the Church honors the Fathers with hymns and prayers and not the philosophers.
We also honor the Fathers when we accept their words and apply their teachings, which are always relevant.
Source: Translated by John Sanidopoulos.