Homily for the Epistle Reading on the Feast of Saint Paraskevi (Metr. Hierotheos of Nafpaktos) 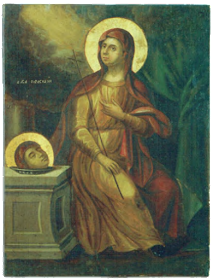 By Metropolitan Hierotheos of Nafpaktos
(Homily for Galatians 3:23-4:5)
On the occasion of the feast of Saint Paraskevi, the Church has established to be read today as an apostolic reading a passage from the letter of the Apostle Paul to the Christians of Galatia, which is known as the epistle to the Galatians.
Studying today's apostolic reading, one assumes that it was chosen by the Church because it includes the phrase: “Those who have been baptized into Christ, have put on Christ. There is neither Jew nor Greek, there is neither slave nor free, there is neither male nor female; for you are all one in Christ Jesus.” (Gal. 3:27-28).
This "neither male nor female" refers to Saint Paraskevi and wants to say that in holiness and martyrdom there is no difference between them, since women struggled with men in contest and martyrdom, they endured everything for the love of Christ. Indeed, when we read the life of Saint Paraskevi and see how many tortures the Saint faced, and in fact with great courage and manliness, we are astounded.
As it becomes clear, this passage of the Apostle Paul is not offered for sociological applications, it does not speak of a social equality between Jews and pagans, between slaves and free people, between men and women. Here the Apostle Paul speaks of the brotherhood experienced in the Church by those who were baptized into Christ and wore the Grace of Christ, which is the Grace of the Triune God. All those who participate in the whole ecclesial life, with the sacraments and asceticism, are united in Christ, are special members of the Church and there are no differences between them, since with the life they live they have transcended the various natural social distinctions.
We see this in the lives of the Saints of the Church, who have the Grace of the Triune God and are members of the Church and siblings among themselves, despite the time they lived from the first century until today, despite their age and color, despite their different professions and their way of life, despite their social status, despite their particular gender and nationality. The Orthodox Church extends to the whole world and all its members, when they live according to its tradition, are siblings to each other. We all belong to a special homeland, but nevertheless we are members of the same universal, ecumenical and catholic Orthodox Church.
Without the Grace of God, and outside the Church, there is even now, in the twenty-first century, great inequality and social injustices. Despite the Charter of Human Rights, even today there is class and racial discrimination and various social inequalities. Despite the abolition of slavery, in many cases people become slaves to their fellow human beings and gender discrimination is observed.
Saint Paraskevi, however, like all the Saints, shows us that all distinctions are overcome in Christ within the Church. And it also shows us that the passing centuries do not erase their memory from the people, especially in the Church and by God. The Grace of God, which is rich in the Church, with the free will of human beings transcends all divisions and distinctions and realizes a society where truth, love, justice, peace and in general true brotherhood in Christ prevails. Such a society is both a gift and a struggle. If we do not struggle, we can gain nothing in our lives, not even the Christian life.
Source: Translated by John Sanidopoulos.