Barbara Alexeyevna Yakovleva was born around 1880 in the Principality of Tver, and was fluent in Russian, English and German. She became a nun at the Saints Martha and Mary Convent in Moscow, which was founded in 1908 by Grand Duchess Elizabeth Feodorovna. She arrived to the Convent from Yalta on August 20, 1910. As of 1911, she was 31 years old.
She was small in stature and deeply pious, and served as Grand Duchess Elizabeth's maid before being tonsured. Her nickname was Varya. The Grand Duchess and other women also took vows on that date. As sisters of Grand Duchess Elizabeth's convent, the women were well known throughout Moscow for performing acts of charity. They took food to the homes of the poor, set up a home for women suffering from tuberculosis, established a hospital to care for the sick, established homes for the physically disabled, pregnant women and the elderly. They also established an orphanage. Their charitable efforts later spread to other cities in Russia.
According to the memoirs of Abbot Seraphim (Kuznetsov), she was "rare in modesty and obedience." He called her, “a faithful performer of all the traditions of the monastery. Although she was the closest person to the Grand Duchess, she was not proud of it; she, like an ordinary sister, was accessible to everyone, affectionate and courteous. No one will remember her dashingly.” 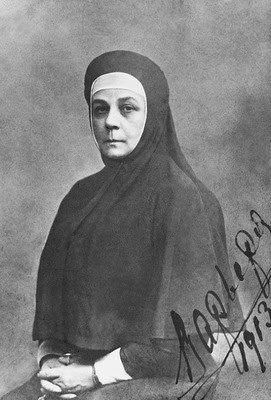 Nun Barbara voluntarily accompanied Grand Duchess Elizabeth when she was arrested on May 7, 1918 following the Russian Revolution of 1917 and sent into exile. Barbara, along with her sister Ekaterina (Yanysheva), followed her into exile in Perm. After the transfer of the Grand Duchess to Yekaterinburg, despite the persuasion and threats of the authorities, she didn’t want to leave her abbess. The group was confined at Yekaterinburg and later at Alapaevsk. On the afternoon of July 18, 1918 they were herded into the woods outside Alapaevsk at gunpoint, clubbed on the back of the head, and thrown one by one into a mineshaft in the woods, which was followed by grenades being tossed in after them. All but Grand Duke Sergei Mikhailovich, who had been shot in the head, survived the fall. They could be heard singing hymns from the bottom of the shaft. One by one they lost consciousness and died. This took place the day after the murder of Tsar Nicholas and his family.
The body of the nun Barbara was found on October 22, 1918 by the administration of Admiral A.V. Kolchak. Together with the remains of the great princes, she was transported throughout Russia, sheltering her from the Bolsheviks. In Chita in the Bogoroditsky Monastery, the body of Barbara was dressed in monastic vestments and in 1920 it was brought to Beijing and buried in the crypt of the Seraphim Church. Soon, fulfilling the desire of Elizabeth Feodorovna to be buried in the Holy Land, the body of Barbara and the Grand Duchess was transported to Jerusalem, where on January 28, 1921 the bodies of the martyrs were solemnly met by the Greek and Russian clergy, the princess Victoria and Russian emigrants. 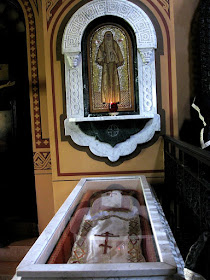 On January 30, Jerusalem Patriarch Damianianos performed a memorial service and buried the remains of Elizabeth Feodorovna and the nun Barbara in the crypt of the Church of the Equal to the Apostles Mary Magdalene in Gethsemane.
In 1981, Nun Barbara was canonized as a "new martyr" by the Russian Orthodox Church Abroad as a victim of Soviet oppression along with the other members of the group. She was in April 1992 also canonized as a martyr by the Russian Orthodox Church inside Russia. In May 1982, the bodies of Grand Duchess Elizabeth Feodorovna of Russia and Barbara were moved from the crypt of the Church of Mary Magdalene in Gethsemane, where only private veneration was possible, to the upper church of Saint Mary Magdalene. 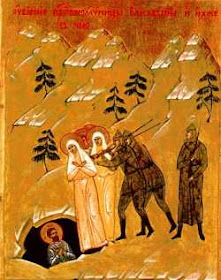 Apolytikion in the Fourth Tone
Emulating the Lord’s self-abasement on the earth, you gave up royal mansions to serve the poor and disdained, overflowing with compassion for the suffering. And taking up a martyr’s cross, in your meekness, you perfected the Saviour’s image within yourself. Therefore, with Barbara, entreat Him to save us all, O wise Elizabeth.
Kontakion in the Third Tone
In the midst of worldliness, thy mournful heart dwelt in Heaven; in barbaric godlessness, your valiant soul was not troubled; you longed to meet your Bridegroom as a confessor, and He found you worthy of your martyric purpose. O Elizabeth, with Barbara, your brave companion, pray to your Bridegroom for us.