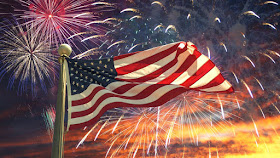 “Why should one refrain from burning hatred, whatever its basis ― race, class, or ideology? Such hatred is in fact corroding many hearts today. Atheist teachers in the West are bringing up a younger generation in a spirit of hatred of their own society.”
- Aleksandr Solzhenitsyn
(1983 Templeton Address, "Men Have Forgotten God", in London)
"Against every law of society and nature, our children are taught in school to hate their own country and to believe that the men and women who built it weren't heroes, but villains. The radical view of American history is a web of lies."
- President Donald Trump
(2020 Fourth of July speech at Mount Rushmore)
Happy Independence Day!
John at 1:18:00 PM
Share
‹
›
Home
View web version