Hagia Sophia and the Ottomans 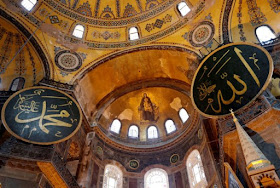 By Metropolitan Hierotheos of Nafpaktos
Great sorrow filled our souls with the transformation of Hagia Sophia into a mosque, which is an ecclesiastical and cultural rape, especially in our time, which is characterized as an era of human rights and respect for religious freedom. This shows both the mentality of the Turks and the response of those who supported them in their decision, because I do not think that they made such moves without any support from some great Heads of State.
However, Hagia Sophia has nothing to do with the Turkish-Ottomans, unless they consider it as booty of a continuous conquest of the Queen City from the year 1453 until today. However, history cannot be erased nor silenced nor misinterpreted.
Father George Florovsky, a great Russian theologian of the 20th century, in a text titled "The Hagia Sophia Churches", writes that the word Sophia is a biblical name, which with two others, namely Dynamis and Eirene, the Apostle Paul refers to the enhypostatic Word of God, Christ.
In fact, he writes, that the first Temple in Constantinople dedicated to the name of Hagia Sophia was probably designed by Constantine the Great, was inaugurated in 360 by Constantius and later built in its current form as the "Great Church" of Justinian.
This means that the name "Holy Wisdom" was considered a confirmation of the theology of the First Ecumenical Synod, which established the Symbol of Faith, in which we confess Christ as "Light from Light, True God from True God, begotten not made, of one essence with the Father through Whom all things were made," that He is the Word and Wisdom of God the Father.
With this perspective there were numerous churches in the then Roman Empire with the name "Hagia Sophia", even among the Slavic peoples.
I wonder: How will this Temple be used as a Mosque with the name "Hagia Sophia", which refers to Christ as God, when the Koran, as analyzed by Archbishop Anastasios of Tirana and All Albania in his well-researched book Islam, denies the fatherhood of God, that is, that God has no Son and is not a Father; it rejects the divinity of Christ, since Muhammad received elements of Arianism and Nestorianism; and it denies the Cross of Christ? What has the Orthodox Hagia Sophia, which refers to the divinity of Christ, got to do with the Koran and the Islamic religion that denies it?
At the same time, I would like to remind you that in the fourteenth century, shortly before the fall of Constantinople to the Ottomans, Saint Gregory Palamas had three dialogues with the representatives of the Ottomans on the basis that Muslims denied the divinity of Christ and upheld that Islam spread throughout the world with the power of the devil, with war, the sword, looting, manslaughter and murder, and Muhammad used violence and pleasure.
I refer to this theological point, in order to show the great difference between the Orthodox Church and Islam and to emphasize that Hagia Sophia is a Temple with deep theology, where the Divine Liturgy was celebrated for over a thousand years, and not just simply something that is culturally good and not simply as just a monument with a great cultural and universal inheritance. More so, it is a provocation for it to become a place of prayer for those of another religion or another faith.
If the purpose of the existence of a Temple is changed, then this constitutes a religious rape. Hagia Sophia is an integral part of the Orthodox Church, of the Ecumenical Patriarchate, which is called the Great Church because of Hagia Sophia, which is the Great Church.
But for the sake of truth it must be underlined that this great ecclesiastical and theological treasure, and secondarily a cultural treasure, was not respected when the Western Franks who occupied it in 1204 or when the Ottomans took possession of it. Perhaps this is because there are common theological principles between Western Christianity and Islam, in regards to the person of God, the word of God, mysticism, social and mental eudaimonism, theocratic totalitarianism, and so on. Yet this is a major issue.
I have been thinking about this lately. President Erdogan has a vision, without me agreeing with it of course, and he is trying to make it happen with the participation of some northern orthodox peoples and some western nations. We, however, as Greeks and Romans, what vision do we have? And from where do we expect help? It is a matter of work.
The third fall of Hagia Sophia (first was Frankish in 1204, second was Ottoman in 1453) which took place with its conversion into a mosque, should activate not only the cultural and ecumenical immune system, but also the ecclesiastical and theological system of our being, and finally to develope our Roman philotimo. At this point there must be close co-operation between the Government and our Church.
Finally, we must remember the speech of Nikephoros Vrettakos: "I do not take the city, I do not take the light." Hagia Sophia is a blinding light, which illuminates for some and blinds others.
Source: Translated by John Sanidopoulos.