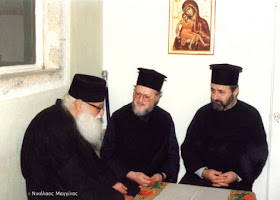 It was the year 1989 (from 22 October till 3 November), when a three-member Patriarchal Exarchy, under the late Metropolitan Maximos of Stavroupoleos, which included Metropolitan Bartholomew of Philadelphia (later Ecumenical Patriarch) and Metropolitan Athanasios of Elenoupolis (later Metropolitan of Chalcedon) visited Mount Athos, with the purpose of establishing the Brotherhood of the Monastery of Vatopaidi.
During this visit, Bartholomew of Philadelphia and Athanasios of Elenoupolis went on a pilgrimage to the wilderness of the Holy Mountain, beginning with the hermitage of the virtuous spiritual father Elder Ephraim in Katounakia. During this meeting, both the future Ecumenical Patriarch and the Metropolitan of Chalcedon asked the Venerable Elder Ephraim, who was distinguished for his wisdom and humility, to give them a spiritual word. His response was recorded in the report of Nicholas Magginas for Ekklesiastiki Aletheia:
"While a man is alive he must always struggle. The first struggle is to conquer one's self. The first and primary enemy of man is not the devil, no, but a man is a threat unto himself. This is because he does not evaluate his thoughts with his hearing, even though we have so many holy fathers to imitate by reading their writings. This is because often times our ego dominates us. When a man conquers himself he is the greatest great-martyr (μεγαλομάρτυρας) and trophy-bearer (τροπαιοφόρος) and bearer-of-victory (νικηφόρος) before God."
During this meeting, the reporter Nicholas Magginas asked Elder Ephraim a few questions as well.
"How do you see the future of our youth?"
"They will return" [that is, they will return to the Church].
"Will the youth become better?"
"They will get better and Christ from time to time will show forth personalities, who will be able to hold off the current momentum of evil. Others will come."
Elder Ephraim reposed on 27 February 1998. On 9 March 2020 the Holy Synod of the Ecumenical Patriarchate officially included the Venerable Ephraim of Katounakia in the list of Saints of the Orthodox Church.