Synaxarion of our Venerable Father Onouphrios the Egyptian

Verses
And the commandment of one tunic Father,
You exceeded having gone about naked to the end.
On the twelfth Onouphrios was removed from life without a tunic.
Venerable Onouphrios was from Egypt, who at first was in a coenobium, which was located in Hermopolis of the Thebaid. Having later heard about the quiet and secluded life of the Prophet Elias and John the Baptist, he left the coenobium and found a home in the desert for sixty years, without seeing another person. The Monk Paphnutios found him, having ventured into the innermost desert, in order to find venerable men, and to be blessed by them.
Having walked for seventeen days, he arrived at the place where Saint Onouphrios was, and approaching near to him, he begged the Saint to reveal his name, and to narrate for him his life story. When Paphnutios learned about these things from his own mouth, he later revealed them to other monks, not only about this Saint Onouphrios, but also concerning other venerable men whom he encountered in the desert.
Because the great Onouphrios departed to the Lord, when the Venerable Pahnutios was present, he took his own outer garment and divided it in two, and placed one part of it over the relic of the Saint and covered it. He did this because he was naked, though he was covered only by his white hairs. The other part he kept as a covering for himself. Paphnutios therefore buried the relic of Onouphrios in that same place, and immediately the hut of the Saint fell, the palm tree that had been planted there dried up, and the water stopped running.
His Synaxis and Feast is celebrated in his most-holy Temple, which is located in the Monastery of Saint Alypios. 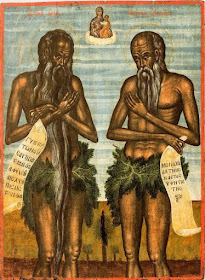 Apolytikion in the First Tone
In the flesh you lived the life of Angels, you were citizens of the desert and treasuries of grace, O Onouphrios adornment of Egypt, and Peter the light of Athos. Wherefore we honour your struggles as we sing to you: Glory to Him Who has strengthened you; glory to Him Who has made you wondrous;/ glory to Him Who through you works healings for all.
Kontakion in Plagal of the Fourth Tone
By your achievements in the wilderness you became like the Bodiless Powers, godly Onouphrios, and venerable Peter adornment of Athos, you heavenly-minded pair who sing: Alleluia.