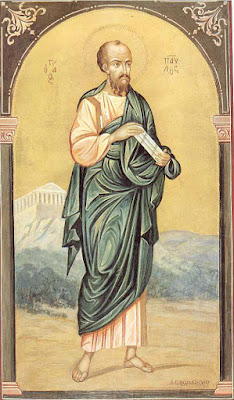 Epistle Reading
Prokeimenon. Grave Mode.
Psalm 63.11,1
The righteous shall rejoice in the Lord.
Verse: Oh God, hear my cry.
The reading is from Acts of the Apostles 21:26-32
English
In those days, Paul took the men, and the next day he purified himself with them and went into the temple, to give notice when the days of purification would be fulfilled and the offering presented for every one of them. When the seven days were almost completed, the Jews from Asia, who had seen him in the temple, stirred up all the crowd, and laid hands on him, crying out, "Men of Israel, help! This is the man who is teaching men everywhere against the people and the law and this place; moreover he also brought Greeks into the temple, and he has defiled this holy place." For they had previously seen Trophimos the Ephesian with him in the city, and they supposed that Paul had brought him into the temple. Then all the city was aroused, and the people ran together; they seized Paul and dragged him out of the temple, and at once the gates were shut. And as they were trying to kill him, word came to the tribune of the cohort that all Jerusalem was in confusion. He at once took soldiers and centurions, and ran down to them; and when they saw the tribune and the soldiers, they stopped beating Paul.
Προκείμενον. Ήχος βαρύς.
ΨΑΛΜΟΙ 63.11,1
Εὐφρανθήσεται δίκαιος ἐν Κυρίῳ.
Στίχ. Εἰσάκουσον, ὁ Θεός, τῆς φωνῆς μου.
Πράξεις Ἀποστόλων 21:26-32 τὸ ἀνάγνωσμα


Gospel Reading
Gospel According to John 16:2-13
English
The Lord said to his disciples, "The hour is coming when whoever kills you will think he is offering service to God. And they will do this because they have not known the Father, nor me. But I have said these things to you, that when their hour comes you may remember that I told you of them. I did not say these things to you from the beginning, because I was with you. But now I am going to him who sent me; yet none of you asks me, 'Where are you going?' But because I have said these things to you, sorrow has filled your hearts. Nevertheless I tell you the truth: it is to your advantage that I go away, for if I do not go away, the Counselor will not come to you; but if I go, I will send him to you. And when he comes, he will convince the world concerning sin and righteousness and judgment: concerning sin, because they do not believe in me; concerning righteousness, because I go to the Father, and you will see me no more; concerning judgment, because the ruler of this world is judged. I have yet many things to say to you, but you cannot bear them now. When the Spirit of truth comes, he will guide you into all the truth."
Greek
Εἶπεν ὁ Κὐριος τοῖς ἑαυτοῦ μαθηταῖς· ἔρχεται ὥρα ἵνα πᾶς ὁ ἀποκτείνας ὑμᾶς δόξῃ λατρείαν προσφέρειν τῷ Θεῷ. καὶ ταῦτα ποιήσουσιν, ὅτι οὐκ ἔγνωσαν τὸν πατέρα οὐδὲ ἐμέ. ἀλλὰ ταῦτα λελάληκα ὑμῖν ἵνα ὅταν ἔλθῃ ἡ ὥρα, μνημονεύητε αὐτῶν ὅτι ἐγὼ εἶπον ὑμῖν. ταῦτα δὲ ὑμῖν ἐξ ἀρχῆς οὐκ εἶπον, ὅτι μεθ᾽ ὑμῶν ἤμην. Νῦν δὲ ὑπάγω πρὸς τὸν πέμψαντά με, καὶ οὐδεὶς ἐξ ὑμῶν ἐρωτᾷ με ποῦ ὑπάγεις! ἀλλ᾽ ὅτι ταῦτα λελάληκα ὑμῖν, ἡ λύπη πεπλήρωκεν ὑμῶν τὴν καρδίαν. ἀλλ᾽ ἐγὼ τὴν ἀλήθειαν λέγω ὑμῖν· συμφέρει ὑμῖν ἵνα ἐγὼ ἀπέλθω. ἐὰν γὰρ ἐγὼ μὴ ἀπέλθω, ὁ παράκλητος οὐκ ἐλεύσεται πρὸς ὑμᾶς· ἐὰν δὲ πορευθῶ, πέμψω αὐτὸν πρὸς ὑμᾶς· καὶ ἐλθὼν ἐκεῖνος ἐλέγξει τὸν κόσμον περὶ ἁμαρτίας καὶ περὶ δικαιοσύνης καὶ περὶ κρίσεως. περὶ ἁμαρτίας μέν, ὅτι οὐ πιστεύουσιν εἰς ἐμέ· περὶ δικαιοσύνης δέ, ὅτι πρὸς τὸν πατέρα μου ὑπάγω καὶ οὐκέτι θεωρεῖτέ με· περὶ δὲ κρίσεως, ὅτι ὁ ἄρχων τοῦ κόσμου τούτου κέκριται. ῎Ετι πολλὰ ἔχω λέγειν ὑμῖν, ἀλλ᾽ οὐ δύνασθε βαστάζειν ἄρτι. ὅταν δὲ ἔλθῃ ἐκεῖνος, τὸ Πνεῦμα τῆς ἀληθείας, ὁδηγήσει ὑμᾶς εἰς πᾶσαν τὴν ἀλήθειαν·