Saint Shalva of Akhaltsikhe was a brilliant military commander in the army of Queen Tamar and the prince of Akhaltsikhe. After his victory at Shamkori in the Ganja region, Shalva carried with him the flag of the caliph, as a sign of the invincibility of the Christian Faith, and conferred it, along with the wealth he had won, as an offering to the Khakhuli Icon of the Theotokos. For his selfless service, Queen Tamar honored him with the rank of commander-in-chief of the Georgian army.
During the reign of Queen Tamar’s daughter Rusudan (1222-1245), the armies of Sultan Jalal al-Din stormed into Georgia. Rusudan rallied the Georgian forces and appointed a new commander-in-chief by the name of John Atabeg.
Six thousand Georgians confronted a Muslim army of two hundred thousand near the village of Garnisi. Command of the advance guard was entrusted to the brave and valorous brothers Shalva and John of Akhaltsikhe, while John Atabeg remained with the main body of the army for the decisive battle. 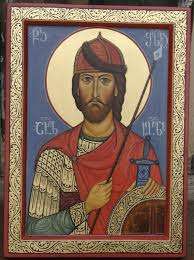 The advance guard fought fearlessly, though the enemy’s army greatly surpassed it in number. The brothers fought with great devotion, hoping for support from the commander-in-chief, but John Atabeg was seized with envy—rather than fear—and never offered them his help. “O envy, source of every evil!” wrote one chronicler of the incident.
The enemy devastated the Georgian army, killing four thousand of its most valiant soldiers. Among them was John of Akhaltsikhe, whose brother Shalva was captured and delivered as a slave to Jalal al-Din.
Jalal al-Din was overjoyed to have the famed soldier and military leader brought before him. He received him with proper honor, offered him cities of great wealth, and promised him more if he agreed to convert to Islam. 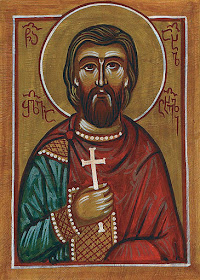 Jalal al-Din sought with great persistence to convert Shalva to Islam, but his efforts were in vain—Shalva would not be converted, and nothing in the world would change his mind. So the sultan ordered that he be tortured to death.
After hours of torment failed to kill him, Jalal al-Din’s servants cast the half-dead martyr in prison, where he later reposed.