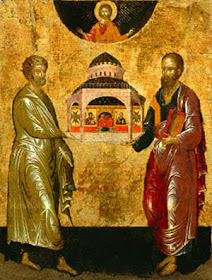 By Elder Philotheos Zervakos
I am in awe and wonder, how the Holy Apostles that we celebrate today, achieved such great and extraordinary miracles! How can one not be in wonder and in awe?
Consider, my brethren, what was the Apostle Peter before? A fisherman. He knew nothing more than fishing, catching fish with a net on Lake Gennesaret. And suddenly you see him preaching to the whole universe. His words were so graceful and sweet that in one of his speeches three thousand and sometimes five thousand believed, whom he then baptized.
Without neither fear nor trembling, he stood before kings and tyrants, teaching and rebuking and remaining fearless in the face of threats and dangers. Eager and tireless, although he was an elder, he began preaching from Jerusalem, running to Judea, Antioch, Pontus and Galatia, Bithynia and Cappadocia, Europe and Asia. In Rome he was martyred for Christ by being crucified by Nero with his head down.
What was the Apostle Paul? A tent-maker, that is, he made tents. He was previously a persecutor of Christianity. When he went to Damascus with authority against the Christians, a sudden light shone on him that blinded his physical eyes, and he heard a voice say to him: "Saul, Saul, why are you persecuting me?" With great fear and awestruck, Paul said, "Who are you, Lord?" And he said, "I am Jesus, whom you are persecuting." Then the Lord commanded him to go to Damascus to find the Apostle Ananias. And after he was baptized, the eyes of his soul and body were opened, and the former persecutor presented himself as a great defender of Christianity.
Like a winged eagle he traveled the whole universe preaching the word of God and baptizing those who believed. In this Apostle one sees wonderful and extraordinary things that transcend all human power; that is why Divine Chrysostom was right to exclaim in one of his sermons: "No other Paul will be born." His struggles and efforts for the gospel are beyond reason; the dangers, tribulations, sorrows, and other afflictions are indescribable.
Listen, my beloved ones, in a few words, you have heard the achievements of the foremost Apostles. How did they perform such signs and wonders? By what means? With faith. All the wondrous and extraordinary things that the Apostles and all the Saints did, they did with faith.
This is the faith of the Saints, but what is the faith of our Christians today?
What do I see, what do I hear from the illiterates, the peasants, the shepherds? Blasphemies, obscenities, thefts. What do I see in the rich, in the merchants? Greed, seizures, avarice. What do I see in the rulers? Egoism, arrogance, flattery, deceit, covetousness. In all, both the people and the clergy, one sees negligence, lethargy, corruption, paralysis. And then we wait for progress, we wait for wars, sorrows and misfortunes to stop. I said it, I say it and I will keep saying it; when we repent, when we become pious, then our troubles will cease.
Let us not be deceived, beloved. The decision against sinners was made by God: "If you keep My commandments, you will eat the goods of the earth, if not, the knife will eat you." "The Lord guards those who love Him, and He will destroy all sinners."
So that we too may not be lost along with sinners, let us turn to our God and heavenly Father with repentance and tears, and let us beg Him to have mercy on us.
All Good, Lover of Mankind, All Gracious, All Merciful, and All Compassionate Lord, You Who for us men and for our salvation became a man like us yet without sin, to free us from sin and lead us to God the Father, through the intercessions of the Most-Blessed Lady the Theotokos Mary, of all the Saints and especially of Your foremost Apostles Peter and Paul, have mercy, enlighten and save us. Amen.
Source: From a manuscript of the Elder Philotheos Zervakos written between 1920-1930. Translated by John Sanidopoulos.