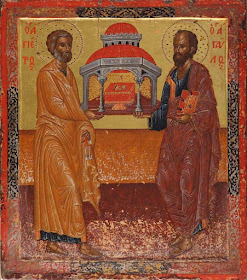 Holy Glorious and All-Praised Foremost of the Apostles, Peter and Paul


Epistle Reading
Prokeimenon. Mode Plagal 4.
Psalm 18.4,1
Their voice has gone out into all the earth.
Verse: The heavens declare the glory of God.
The reading is from St. Paul's Second Letter to the Corinthians 11:21-33; 12:1-9.
English
Brethren, whatever anyone dares to boast of -- I am speaking as a fool -- I also dare to boast of that. Are they Hebrews? So am I. Are they Israelites? So am I. Are they descendants of Abraham? So am I. Are they servants of Christ? I am a better one -- I am talking like a madman -- with far greater labors, far more imprisonments, with countless beatings, and often near death. Five times I have received at the hands of the Jews the forty lashes less one. Three times I have been beaten with rods; once I was stoned. Three times I have been shipwrecked; a night and a day I have been adrift at sea; on frequent journeys, in danger from rivers, danger from robbers, danger from my own people, danger from Gentiles, danger in the city, danger in the wilderness, danger at sea, danger from false brethren; in toil and hardship, through many a sleepless night, in hunger and thirst, often without food, in cold and exposure. And, apart from other things, there is the daily pressure upon me of my anxiety for all the churches. Who is weak, and I am not weak? Who is made to fall, and I am not indignant? If I must boast, I will boast of the things that show my weakness. The God and Father of the Lord Jesus, he who is blessed for ever, knows that I do not lie. At Damascus, the governor under King Aretas guarded the city of Damascus in order to seize me, but I was let down in a basket through a window in the wall, and escaped his hands. I must boast; there is nothing to be gained by it, but I will go on to visions and revelations of the Lord. I know a man in Christ who fourteen years ago was caught up to the third heaven -- whether in the body or out of the body I do not know, God knows. And I know that this man was caught up into Paradise -- whether in the body or out of the body I do not know, God knows -- and he heard things that cannot be told, which man may not utter. On behalf of this man I will boast, but on my own behalf I will not boast, except of my weaknesses. Though if I wish to boast, I shall not be a fool, for I shall be speaking the truth. But I refrain from it, so that no one may think more of me than he sees in me or hears from me. And to keep me from being too elated by the abundance of revelations, a thorn was given me in the flesh, a messenger of Satan, to harass me, to keep me from being too elated. Three times I besought the Lord about this, that it should leave me; but he said to me, "My grace is sufficient for you, for my power is made perfect in weakness." I will all the more gladly boast of my weaknesses, that the power of Christ may rest upon me.
Προκείμενον. Ήχος πλ. δ'.
ΨΑΛΜΟΙ 18.4,1
Εἰς πᾶσαν τὴν γῆν ἐξῆλθεν ὁ φθόγγος αὐτῶν.
Στίχ. Οἱ οὐρανοὶ διηγοῦνται δόξαν Θεοῦ.
Πρὸς Κορινθίους β' 11:21-33, 12:1-9 τὸ ἀνάγνωσμα


Gospel Reading
Gospel According to Matthew 16:13-19
English
At that time, when Jesus came into the district of Caesarea Philippi, he asked his disciples, "Who do men say that the Son of man is?" And they said, "Some say John the Baptist, others say Elijah, and others Jeremiah or one of the prophets." He said to them, "But who do you say that I am?" Simon Peter replied, "You are the Christ, the Son of the living God." And Jesus answered him, "Blessed are you, Simon Bar Jona! For flesh and blood has not revealed this to you, but my Father who is in heaven. And I tell you, you are Peter, and on this rock I will build my church, and the gates of Hades shall not prevail against it. I will give you the keys of the kingdom of heaven, and whatever you bind on earth shall be bound in heaven, and whatever you loose on earth shall be loosed in heaven."
Greek
Τῷ καιρῷ ἐκείνῳ, ἐλθὼν δὲ ὁ ᾿Ιησοῦς εἰς τὰ μέρη Καισαρείας τῆς Φιλίππου ἠρώτα τοὺς μαθητὰς αὐτοῦ λέγων· τίνα με λέγουσιν οἱ ἄνθρωποι εἶναι τὸν υἱὸν τοῦ ἀνθρώπου; οἱ δὲ εἶπον· οἱ μὲν ᾿Ιωάννην τὸν βαπτιστήν, ἄλλοι δὲ ᾿Ηλίαν, ἕτεροι δὲ ῾Ιερεμίαν ἢ ἕνα τῶν προφητῶν. λέγει αὐτοῖς· ὑμεῖς δὲ τίνα με λέγετε εἶναι; ἀποκριθεὶς δὲ Σίμων Πέτρος εἶπε· σὺ εἶ ὁ Χριστὸς ὁ υἱὸς τοῦ Θεοῦ τοῦ ζῶντος. καὶ ἀποκριθεὶς ὁ ᾿Ιησοῦς εἶπεν αὐτῷ· μακάριος εἶ, Σίμων Βαριωνᾶ, ὅτι σὰρξ καὶ αἷμα οὐκ ἀπεκάλυψέ σοι, ἀλλ᾿ ὁ πατήρ μου ὁ ἐν τοῖς οὐρανοῖς. κἀγὼ δέ σοι λέγω ὅτι σὺ εἶ Πέτρος, καὶ ἐπὶ ταύτῃ τῇ πέτρᾳ οἰκοδομήσω μου τὴν ἐκκλησίαν, καὶ πύλαι ᾅδου οὐ κατισχύσουσιν αὐτῆς. καὶ δώσω σοι τὰς κλεῖς τῆς βασιλείας τῶν οὐρανῶν, καὶ ὃ ἐὰν δήσῃς ἐπὶ τῆς γῆς, ἔσται δεδεμένον ἐν τοῖς οὐρανοῖς, καὶ ὃ ἐὰν λύσῃς ἐπὶ τῆς γῆς, ἔσται λελυμένον ἐν τοῖς οὐρανοῖς. τότε διεστείλατο τοῖς μαθηταῖς αὐτοῦ ἵνα μηδενὶ εἴπωσιν ὅτι αὐτός ἐστιν ᾿Ιησοῦς ὁ Χριστός.