The Veneration of the All-Holy Mother of God in the Theology of St. Maximos the Greek 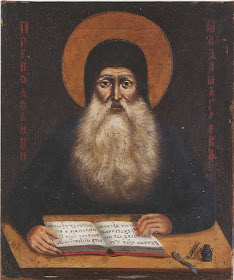 “I do not have Samuel, the great priest who was reacting against the sinner Saul, I do not have Nathan who cured David with a virtuous parable and with that saved him from a harvest sin, I do not have adherents-zealots like Elijah and Elisha, who were not ashamed before the aggressive Emperor Samaritan, I do not have Ambrose, the marvellous priest of God, who did not fear the greatness of the empire of Emperor Theodosius, I do not have Basil the Great, who was enlightened in the shrine and had wisdom, and with most clever teachings threatened Valent the persecutor of my sister, I do not have a John with a golden mouth (that means Chrysostom), who noticed the greedy Eudoxia and was aware of the tears of the poor widow …”