The Temptations in the Wilderness 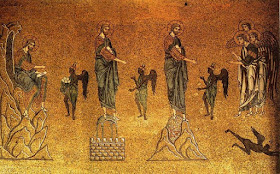 By Alexandros Kosmatopoulos
In the narrative of the event of the baptism of Christ, the Forerunner is hesitant and in awe at the prospect of baptizing Jesus: ‘I need to be baptized by you, and do you come to me?’ Jesus insisted, however, and replied, ‘Let it be so now; it is proper for us to do this to fulfill all righteousness’ (Matt. 3:14-16). Time has to be completed, the past has to be completed, a long period of preparation has to be completed for the way to appear between the baptism in water and the baptism of fire (Matt. 3:11).
I believe that the baptism of fire involves an encounter with the powers of darkness. The battle is fought not against flesh and blood, but against the rulers, against the principalities, against the powers of this dark world and against the spiritual forces of evil in the heavenly realms (Eph. 6:12). With these words, Saint Paul implies that these powers claim to be of a transcendental nature and that they play an important role in people’s lives. Christ’s encounter with the devil introduces us to the struggle with this ancient evil.
After His baptism in the Jordan, Christ went out into the wilderness, to a place which is like a mirror, insofar as you can’t hide anything there. He underwent temptations for forty days, without tasting food. He didn’t go into the wilderness in submission to some command, or to ‘follow His own free will’. It was the Spirit Who led Him there. The three temptations He was subjected to encapsulate not only the whole history of the world, but also the attitude of those whose sole desire is to walk in the Lord’s footsteps. Christ triumphed over the same temptations that Adam gave in to and thus He neutralized their effects. He rejected the blandishments of the devil and, in so doing, undertook the task of saving the world.
Who is the devil, this mysterious personality who, these days, is considered to be entirely mythical? When the Evangelists and Saint Paul call him the ruler of the world and the god of this age, they know what they’re talking about. Above all else, Satan seeks to deceive and delude, to show an illusory path as the true way, which is, at the same time, liberating. He did not hold to the truth, for there is no truth in him (Jn. 8:44). When he can’t deceive, he transmogrifies, as he did in the case of Job when he became a public prosecutor. The devil doesn’t present a positive stance towards Jesus. He’s simply derogatory. And yet, he’s the lord of all the kingdoms of the world, and all of our actions are based on his way of doing things and his machinations…
Christ’s attitude is a model of humility. His answers [to the devil and his temptations] are taken from the Old Testament and aren’t arbitrary. He doesn’t face temptation as an individual, even a distinguished one. He enters completely into the position of the person who’s tied to God, thus demonstrating, at the same time, His divine origins. Jesus’ divinity is expressed through humility.
Hearkening to the voice of Christ means casting off all claims to power, as well as any ideological orientation. Christ doesn’t ask us to follow rules, but to listen to His words. If people refuse to listen they’re hammering out their own ineluctable fate and they can’t blame God for that. ‘If you hold to my teaching, you are truly my disciples. Then you will know the truth, and the truth will set you free’ (Jn. 8:31-32). Freedom comes from the truth of His words and is not an abstract notion to which we can all give whatever meaning we want. His truth frees us from the chains forged by our fulfilled or unfulfilled desires, testing us as we are or as who we think we are.
‘And when the devil had finished all his temptations, he left him for a time.'