The Resurrection of a Dead Baby by Saint George of Chozeba 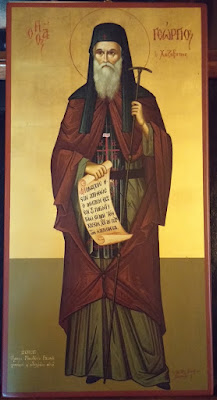 There was once a farmer from Jericho, who was dearly loved by the brothers of the [Lavra at Kalamon]. He had an only child, an infant, that - alas! - died. Thereupon the father placed the infant into a basket. On top, he placed a few fruits, which he had grown, and then covered them with vine leaves. He then took the basket and went to the lavra. Once there, he knocked on the door to the cells. Abba George came out and let him in. After the farmer entered, he made a prostration before the elder and placed the basket in front of the brethren, requesting that they bless the fruit of his field. He then took their leave. The brothers took the fruits from the basket, only to find the dead infant.
When Abba Herakleides beheld the dead infant, he was shaken and said to his brother, "Call the man back, for temptation has visited us sinners today." Then Father George, who at the time was forty years of age or more, bowed before Abba Herakleides and said, "Do not distress yourself, father, nor be angry. Instead, let us beseech the all-merciful and benevolent God with faith. If He should overlook our sins and resurrect the child, then the father would receive the baby alive, even according to his faith, and depart strengthened in God. If His divine grace will not grant this request, then we shall call the father and say, 'We are sinful men and have not obtained such heights, nor do we have such boldness before God.'"
The elder was persuaded. Thus, they stood in prayer, shedding tears and offering contrite hearts. The all-merciful God and Lover of mankind does the will of those who fear him. He hearkened to their supplications and resurrected the dead child. Then they called the child's father and said to him, "Behold, your son lives by the mercy of God. Do not tell anyone of this, lest they should bring upon us toil, trouble and affliction." The father received his son and departed, blessing and glorifying the benevolent, merciful, and life-giving God.
From the Life of George the Chozebite, written by his disciple Anthony around 600 A.D.