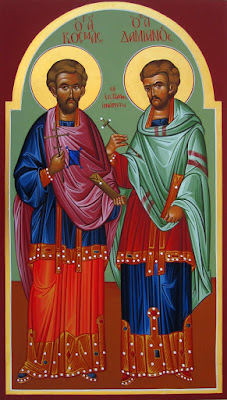 Saint Sophronios of Jerusalem wrote the Life and Miracles of the Unmercenary Saints Cyrus and John. He did this after visiting the shrine of these Saints in Menuthis, which is outside Alexandria, at which time he was healed of a serious and painful eye ailment that afflicted him for months. This took place around the year 610. This was also the year Saint John the Merciful, Patriarch of Alexandria, died. Sophronios, accompanied by John Moschos, were acquainted with John the Merciful while they were in Alexandria. Sophronios and John wrote a biography of John the Merciful after his repose, but it is no longer extant. Leontios, who was Bishop of Neapolis in Cyprus, wrote a supplemental biography to follow up on that which was written by Sophronios and John, and this is the primary source we have for a biography of John the Merciful. In Leontios' account, we only have two mentions of Saints Cyrus and John, whereas we can assume there may have been more references to them in the biographies of Sophronios and John Moschos.
The first reference is in chapter one, where Leontios says he was visiting Alexandria to pay reverence to Saints Cyrus and John, and during this pilgrimage he met a priest who introduced him to John the Merciful, who had soon before reposed, and recounted to him his life and miracles. There he writes: "I, all unworthy as I am, came up to Alexandria to revere the holy and victorious martyrs, Cyrus and John,* and to enjoy their succour, and while I was in Alexandria, I met with certain pious Christian men."
The second and only other reference comes from chapter 31, where it says: "One day the Saint was in the Church of the holy and victorious martyrs, Cyrus and John, whither he had gone for prayer on their glorious anniversary, and as he went out of the gate of the city a woman was waiting for him and fell at his feet, crying: 'Avenge me on my brother-in-law, for he is wronging me!' Some of his suite, who felt that they could speak for him, told her that he would attend to the matter on his return, whereupon the all-wise one remarked: 'How will God receive my prayers if I put this woman aside, and who will secure for me that I shall live till tomorrow, and I might go to Christ with no excuse to make about her?' He did not leave the place until he had caused justice to be done for her."
What we primarily understand from these two accounts is that the shrine of Saints Cyrus and John in Menuthis, which had been established by Saint Cyril of Alexandria in the fifth century, was an important center of pilgrimage in the sixth and seventh century, prior to the composition of the Life and Miracles of these Saints written by Saint Sophronios after 610.