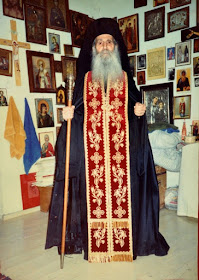 By Dr. Stylianos Papadopoulos
This photograph which is being published for the first time in the pages of this edition [Μακαριστός Ιάκωβος Τσαλίκης, 5th edition, published in 2000] was taken in the cell of the late Elder Iakovos eleven months after his death.
The Cypriot Hierodeacon who took it wasn't able to visit the late Elder while he was alive, so he wanted to take a picture of his cell.
And - O the miracle! - when the film was developed, everyone was amazed to see the form of the late Elder.
The letter of the journalist-writer, Mr. M.G. Michaels, who informed us of this miracle, is published below:
5/15/94
Dear Professor,
Christ is Risen and Many Years.
The photograph I am sending you is to inform you of a miraculous event that took place with the late Elder Iakovos Tsalikis, whom you have written about. In short:
A certain young Deacon from Cyprus, who is known to me, visited the Monastery of the Elder in October of 1992, to meet Fr. Iakovos up close. There the monks informed him that Fr. Iakovos reposed last year on November 21st 1991. The Deacon was sad that he didn't get to meet the late Elder while he was alive, so instead he asked the monks to see his cell and to photograph some of his belongings. And so it happened.
When the Deacon returned to Cyprus, he took the film to a certain photo studio to have it developed. In one of the photographs (the one I sent you), the late Elder is depicted. At the bottom left corner of the photo, you will see the exact date (10-8-92) when the photo was taken.
I have one observation that I made about the photo. The late Elder is full-bodied, in gigantic proportions, in relation to the space in his cell and the very near distance to the wall from where the photo was taken. Make a comparison with the photo on the cover of your book. A professional Cypriot photographer told me that it takes at least 15 feet to shoot a full-length, upright person.
With heartfelt wishes,
M. Michaels
Source: Translated by John Sanidopoulos.