The Man Who Starved to Death While Feeding the Hungry 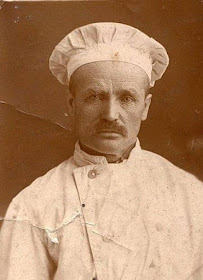 Daniil Ivanovich Kyutinen (1883-1942), Finnish by birth, was a baker in besieged Leningrad during World War II. Tens of thousands of loaves of bread passed through his hands, which he and his associates in the besieged Leningrad fed persistent residents of the city. He died on February 3, 1942 at the age of 59 of starvation at work, because he did not eat a single gram of the baked bread he made and distributed daily to the hungry. The death certificate (below) of February 4, 1942 indicates the cause - dystrophy. He is buried in the Shuvalovsky Cemetery. 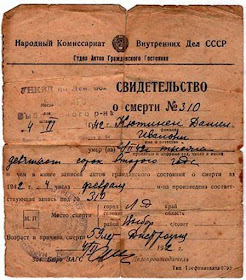 The siege started on 8 September 1941, when the last road to the city was severed. Although the Soviets managed to open a narrow land corridor to the city on 18 January 1943, the siege was only lifted on 27 January 1944, 872 days after it began. It was one of the longest and most destructive sieges in history and possibly the costliest in terms of casualties.
The 872 days of the siege caused extreme famine in the Leningrad region through disruption of utilities, water, electricity and food supplies. This resulted in the deaths of up to 1,500,000 soldiers and civilians and the evacuation of 1,400,000 more, mainly women and children, many of whom died during evacuation due to starvation and bombardment. Piskaryovskoye Memorial Cemetery alone in Leningrad holds half a million civilian victims of the siege. Economic destruction and human losses in Leningrad on both sides exceeded those of the Battle of Stalingrad, the Battle of Moscow, or the atomic bombings of Hiroshima and Nagasaki. The siege of Leningrad is the most lethal siege in world history, and some historians speak of the siege operations in terms of genocide, as a "racially motivated starvation policy" that became an integral part of the unprecedented German war of extermination against populations of the Soviet Union generally.
Civilians in the city suffered from extreme starvation, especially in the winter of 1941–42. From November 1941 to February 1942 the only food available to the citizen was 125 grams of bread per day, of which 50–60% consisted of sawdust and other inedible admixtures. For about two weeks at the beginning of January 1942, even this food was available only for workers and military personnel.
In conditions of extreme temperatures, down to −30 °C (−22 °F), and city transport being out of service, even a distance of a few kilometers to a food distributing kiosk created an insurmountable obstacle for many citizens. Deaths peaked in January–February 1942 at 100,000 per month, mostly from starvation. People often died on the streets, and citizens soon became accustomed to the sight of death.
John at 12:00:00 PM
Share
‹
›
Home
View web version