St. George of Ioannina: The Icon Painted of him 13 Days after his Martyrdom 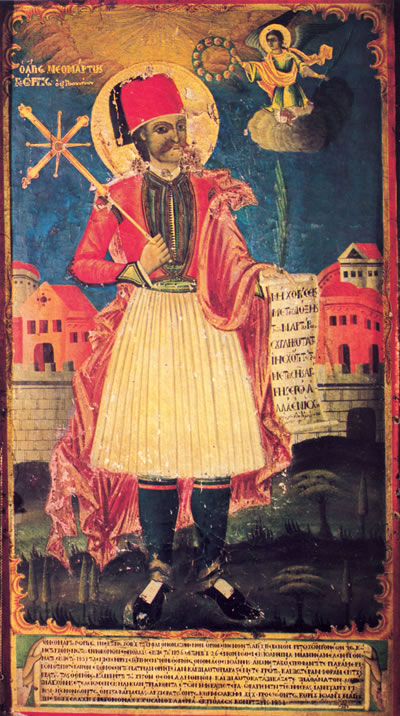 Saint George of Ioannina was martyred for refusing to deny his Orthodox Christian faith and embrace Islam on Monday 17 January 1838. Having been executed by hanging, the Turks kept his body hanging till January 19th, during which time a wondrous sign took place revealing his sanctity, for a bright light appeared over his head like a crown every night throughout the entire duration. Metropolitan Joachim of Ioannina then buried his body at the western door of the Cathedral of Saint Athanasios. This was followed by many miracles to all who approached him with faith. Thirteen days after his martyrdom the first icon of Saint George was painted wearing the kilt, and on 25 February 1838, forty days after his martyrdom, the first Divine Office in his honor was composed. One year later his first biography was written. His official canonization took place on 19 September 1839 by Ecumenical Patriarch Gregory VI, at the proposal of Metropolitan Ioannikios of Ioannina, which was submitted with many of the testimonies of miracles granted to the faithful. The canonization of the Holy New Martyr George of Ioannina is one of the fastest and surest canonizations ever in the history of the Church.