Saint Melangell the Hermitess of Wales (+ 641) 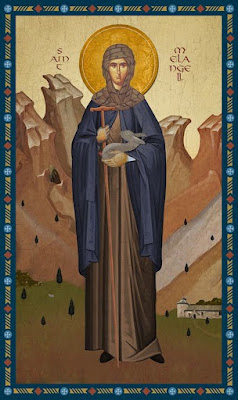 On this day [January 31 and May 27] we commemorate the Venerable Melangell, who hailed from Ireland, and lived in asceticism in Wales.
Verses
Melangell, of the coming eternal life,
Together with the angelic choirs, was made worthy.
Saint Melangell's (pronounced Mel-en-geth, whose name has been latinised as Monacella) story begins as a familiar one. She was a seventh century Irish princess who had dedicated her life to prayer. Her father, King Iowchel, had arranged for her to marry against her will. Wishing to preserve her life of virginity and prayer, in about the year 590 she fled Ireland and settled in the countryside of Montgomeryshire (present-day Powys), at the head of the Tanant Valley in Northern Wales. There she lived a life of solitude and prayer, sleeping on bare rock with a cave as her cell.
Nearly fifteen years later, in the year 604, Brochwel Ysgithrog, then Prince of Powys and Earl of Chester, encountered the young Melangell while hunting, when the hare that his hounds were chasing took refuge under her cloak. Seeing her, the hounds stopped. Brochwel tried to command them to go on but Melangell defied them and they turned and fled.
Brochwel had never experienced anything like this, and was keen to speak to the mysterious young woman. It is said that when he beheld her beauty he wanted to marry her, but she declined. When he heard her story he was so moved and impressed by her determination and piety that he donated to her a parcel of land in the valley where she could live her monastic life among the wild creatures there. 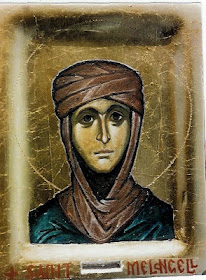 News of her spread throughout the area and other women came to gather around her, forming a community there. They ordered their communal life on prayer and works of mercy, providing sanctuary to the poor and needy. Melangell was the mother to this community of women for the remaining 37 years of her life, and was often seen surrounded by hares during this time.
After Melangell's death, her tomb became a place of healing, with pilgrims traveling for miles to venerate her relics and ask her intercession. Brochwel's successors decreed that the area must be protected as a place of solace for those in need of healing and restoration, as well as a place of refuge for the small animals, who were to remain unharmed. So it remained for centuries.
However, at the Reformation, the site was desecrated. The holy shrine was destroyed and the stones were scattered in the churchyard, with some incorporated into walls and other structures. In an act of love and devotion reflected in many parts of the country where holy places were laid to ruin, the pious local people had hidden Saint Melangell's relics so that the desecrators could not destroy them. However, over time, any memory of their location died. 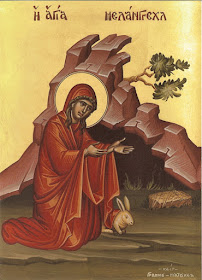 By the late twentieth century, the church was in such a state of disrepair that serious renovation work was required to save it. It was during this work that bones were discovered hidden in the fabric of the church. These were found to be those of a woman, dating from the sixth or seventh century - undoubtedly those of the Saint, saved by the piety of the local people centuries ago.
The shrine was reconstructed from the stones reclaimed from around the churchyard, and the holy relics were enshrined once more. The little church at Pennant Melangell (now Powys) is once again a place of pilgrimage, where people go to venerate Saint Melangell, to ask for her prayers, and to thank God for her as a model of piety and protectress of the little animals. In the little church there is some wood carving from the old rood screen depicting the story of the saint and the remains of her shrine which is now restored. A quarter of a mile away on the opposite side of the valley there is a cleft in the rock which is known as Gwely Melangell, Melangell's hard bed.
For centuries no one would kill a hare in the church or vicinity of Pennant Melangell. Also, if anyone shouted at a hunted hare "God and Melangell be with thee", it was sure to escape. To this day, in honor of the Saint, the hares are respected by the local hunters and are never harmed. After her death, Saint Melangell became the patron saint of hares and small animals.
In England Saint Melangell is commemorated on May 27, and in Wales on January 31. 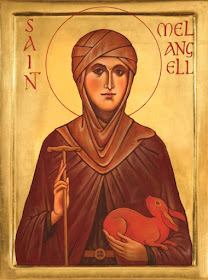 Troparion in Tone 8
Preferring the rigours of monasticism to worldly status and marriage, O pious Melangell, though wast fifteen years on a rock, emulating the example of the Syrian Stylites. Wherefore, O Saint, pray to God that He will give us strength to serve Him as He wills, that we may be found worthy of His great mercy.
Kontakion in Tone 4
Praise, glory and honour are thy due, O righteous Melangell, for in consecrating thy virginity to Christ, thou didst give us a model of Christian living. Wherefore we who keep thy festival pray for grace to amend our lives according to thy example, glorifying God in every word and deed. 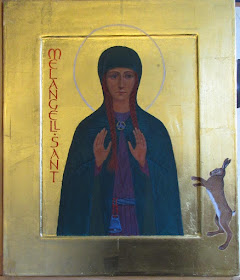 Below are hymns translated from a Greek service composed by the hymnographer Abbess Isidora of the Monastery of Saint Hierotheos:
Oikos
As when the rabbit fled to your cave when it was being chased by the hunting dogs to be delivered from lack of mercy, thus, O Venerable Mother, we who are warred against by the devil, who prowls like a lion seeking to devour us, hasten to the protection of your intercessions, crying out: help us, O most-sympathetic Melangell, trample upon the enemy, through the God-given sword of your intercessions, and preserve us from his snares, guiding us towards the working out of our salvation with fear and trembling, and ceaselessly entreat your Bridegroom Christ, on behalf of those who honor you.
Kontakion in the Fourth Tone
You stood as abbess in asceticism in the desert like the pine tree, shining upon glorious nuns with wonderworking, and ever entreat on behalf of those who honor you.
Apolytikion in the First Tone
Through your righteous ways and angelic life, you pleased God and were proved, O Melangella, for you abandoned your noble birth, and royal riches and honor, and came to the desert, becoming a mother to virgin nuns. Rejoice, O root of Ireland, rejoice, O boast of the Celts, rejoice, O lamp of Brittany and the pride of Wales.
Doxastikon of the Stichera in the Plagal of the Second Tone
Today, in the exhalation of spring, the memory of the Venerable Melangell gives fragrance to the faithful as the lily of the field. For the fragrance of Christ, according to Paul, drives away the odor of death, and to her we cry out: Rejoice, you who shattered the infirmity of female nature, and with manliness of mind, you struggled as a bodiless one. Rejoice, the mark of royal glory, who walked the narrow way of asceticism. Rejoice, the root of Ireland divine in form, the protector and defender of Wales, and the protector of those who bear your name, who are in dangers. Intercede, we pray, to the Trinitarian God, that He have mercy on our souls.
Doxastikon of the Aposticha in the Plagal of the Fourth Tone
When Daniel, unharmed in the lion's den, was beheld by the king, he cried out: "Great are You, the God of Daniel, and there is none other beyond You." When King Brochwel, who was hunting with his dogs, beheld you, O Venerable Melangell, he wondered at your manliness, and sought to wed you, promising riches and glory. You, however, cried to him: "I am not seeking a groom, for I do not wish for a mortal bridegroom. I left my people and my father's house, and came to Wales, and dwelt in this cave. Therefore, it is not I who live, but Christ lives within me." Entreat Him, O Mother, pouring forth wonders, on behalf of those who honor you with fervor.
Megalynarion
Rejoice, O wondrous daughter of kings, the flower of the desert, and the adornment of virgins, rejoice, O merciful Melangella the Righteous, the most-notable glory of Wales. 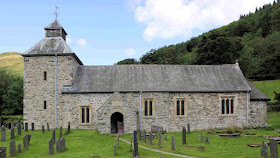 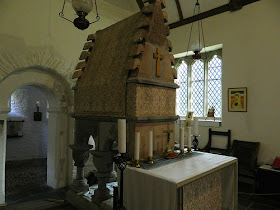