Venerable Eleazar of Anzersk was born in the city of Kozelsk into the merchant family of Athanasius Sevryukov. With the blessing of his parents he went off to the Solovki Monastery, where he received monastic tonsure from the abbot Saint Irenarchus (July 17).
At the monastery he displayed an astonishing artistic gift: he learned woodcarving and he took part in the embellishment of the Transfiguration Cathedral. With the blessing of the abbot, he went to the island of Anzersk in 1612, about twenty miles from the monastery, where he became a hermit, devoting himself to constant prayer and meditation on God. 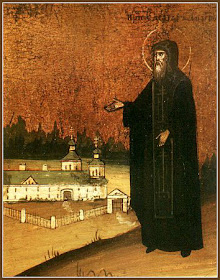 In order to obtain subsistence for himself on the island wilderness, Saint Eleazar carved wooden cups, which he left at the dock. On the cups he wrote a message requesting food. Fishermen left bread and other supplies for the ascetic, and they were rewarded with a great catch of fish.
Once the tempter appeared to him in the form of a brother of the monastery with an invitation to come to the monastery. The ascetic did not want to go on the journey before he fulfilled his secret rule of prayer, and he began to pray. But when he had to read the Lord’s Prayer – “Our Father” - the imaginary brother left the cell; the ascetic was amazed and continued to pray. Finally, after several tries of repeating the same story, the imaginary brother disappeared without a trace, and the ascetic saw that if he went to the monastery, the stormy sea would have swallowed him up. 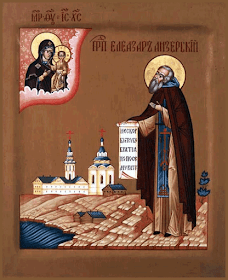 In the year 1616 Saint Eleazar was elevated to the Great Schema. Four years later he moved to the other side of the island to be near Solovki Monastery. There he settled in a cell next to the dilapidated Chapel of Saint Nicholas (established for temporary workers in saltworks). Disciples gathered around the Saint wishing to live near him and benefit from his instruction. He organized a skete with a strict rule of monastic life following the ancient form. Monastic cells were built one verst away from one another, and the hermits gathered together only for Saturday and Sunday services. 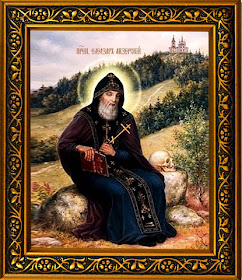 Among the disciples of Saint Eleazar was the hieromonk Nikita, the future Patriarch Nikon. Once, according to the biography of the Saint, Eleazar had a vision in which Nikon had a omophorion on his shoulders, and thereby predicted the future patriarchate. However, later, Nikon began to reproach the Anzersk monks for loving money and blamed Eleazar himself for it. After this, Nikon left the skete after three years there.
Tsar Michael (1613-1645), who mourned the fact that he did not have an hier to the throne, learning of the Saint’s ascetic life, summoned him to Moscow. Saint Eleazar predicted the birth of his son, and in return the Tsar generously gave him help to build a stone church on the island dedicated to the Holy Trinity, and also a monastery which came to be known as Holy Trinity Anzersk Monastery. The tsar gave the priviledge of this monastery to be separated from Solovki Monastery. 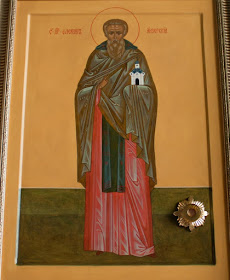 Saint Eleazar loved books. He compiled three books, “Flower Gardens,” collecting edifying sayings and examples from various sources. He also wrote a commentary on the Rule for monastic cell life.
Saint Eleazar died in great old age, foreseeing the time of his death. It is not known how old he was, but he lived at Ansersk for forty years, and he was at Solovki for some time before that. He reposed on January 13, 1656 after receiving Holy Communion.

In 1757, during construction of a church over his grave, the relics of Saint Eleazar were found to be incorrupt. In 1925 his relics were taken and today their location is not known. In 2003 a particle of his relics was discovered in the Church of the Resurrection in Anzersk Skete. 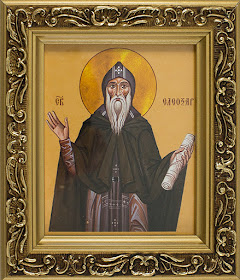 Apolytikion in the Third Tone
You rejected the perishable and bodily, trying to achieve the incorruptible and, moving away from the world, settled on the sea island, where you worked diligently for many years to the Lord, therefore you, Venerable Father Eleazar, have enriched yourself with insights and miracles. Pray for Christ God to grant us peace and great mercy.