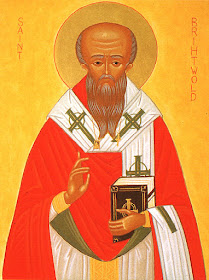 Saint Brihtwald (Brithwold) was a monk at Glastonbury in Wiltshire who was chosen Bishop of Ramsbury in 995, and governed it for 50 years. His fame comes not from his long episcopate, but from his prophecy and vision concerning the successor to Saint Edward the Confessor.
Brihtwald was once weeping over the plight of the people, “and asked,” records King Edward’s anonymous biographer, “that God’s mercy should look favorably upon them. At that time he was in the Monastery of Glastonbury [during the reign of King Canute], and weary after so many tears the man of God fell asleep. When lo! In the Holy of Holies he saw the blessed Peter, the first of the Apostles, consecrate the image of a seemly man as king, mark out for him a life of chastity, and set the years of his reign by a fixed reckoning of his life. And when the king even at this juncture asked him of the generations to come who would reign in the kingdom, Peter answered, ‘The kingdom of the English belongs to God; and after you he has already provided a king according to His will.’”
Saint Brihtwald died in 1045 and was buried in Glastonbury Abbey. After his death the see of Ramsbury was moved to Old Sarum.