Monastery of the Temptation: Where Jesus Was Tempted by the Devil 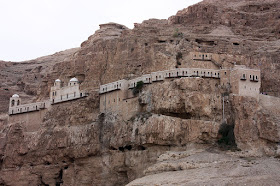 “And Jesus being full of the Holy Spirit returned from Jordan, and was led by the Spirit into the wilderness, being forty days tempted of the devil. And in those days he did eat nothing: and when they were ended, he afterward hungered.” Luke 4:1-2
The Monastery of the Temptation is a Greek Orthodox Monastery located three kilometers northwest of Jericho, Palestine. It was built on the slopes of the Mount of Temptation 350 meters above sea level, situated along a cliff overlooking the city of Jericho and the Jordan Valley. According to Luke (4:1-13) and Matthew (4:1-11) Jesus was tempted by the devil, which ancient tradition identifies as this being the location where it took place. 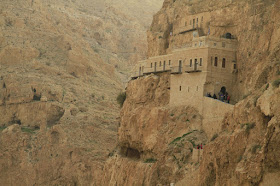 The monastery receives its name from the mountain which the early Christians referred to as the "Mount of the Temptation". The Mount of Temptation was identified by Saint Helen, mother of Emperor Constantine I, as one of the "holy sites" in her pilgrimage in 326. The earliest monastery was constructed here in the 6th century.
When the Crusaders conquered the area in 1099, they built two churches on the site: one in a cave halfway up the cliff and a second on the summit. They referred to the site as Mount Quarantania (from Quaranta meaning "forty" in Italian, the number of days in the Gospel account of Jesus's fast). This period of fasting became the model for the practice of Great Lent. According to tradition from the 12th century, two of the devil’s three temptations were on the Mount of Temptation.

The land upon which the modern monastery was built was purchased by the Greek Orthodox Church in 1874, at which time it became known as Sarantario Monastery (from Saranta meaning "forty" in Greek) and the mountain known as Mount Sarantarion. In 1895, the monastery was constructed around a crude cave chapel that marks the stone where Jesus sat during his fast. The Greek Orthodox Church, along with its Palestinian Orthodox followers, originally attempted to build a church at the summit, but were unsuccessful; the unfinished walls of that church are located on a slope above the monastery. 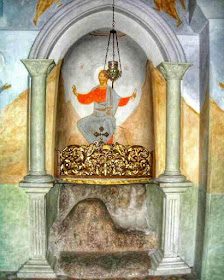 At the south summit of the monastery inside a chapel at a higher point on the mountain there is a stone on which, according to the Gospel of Matthew, Jesus sat as Satan offered him all the kingdoms of the world in return for worshiping the devil.
As of 2002, three Orthodox monks were dwelling in the monastery and were guiding visitors to the site. Today there is only one monk. 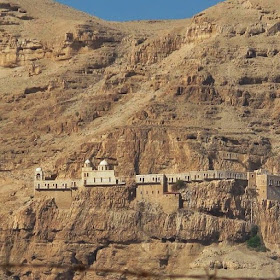 In 1998, a cable car was built from Jericho's Tell es-Sultan to the level of the monastery by an Austrian-Swiss company as a tourist attraction for the year 2000, when they were expecting many pilgrims. At present there is a restaurant, a cafe and a souvenir shop at the monastery entrance for the tourists.
The present Monastery of the Temptation (Sarantario Monastery), reconstructed at the end of the 19th century, seems to grow out of the mountain. The northern half is cut into the almost sheer cliff, while the southern half is cantilevered into space.