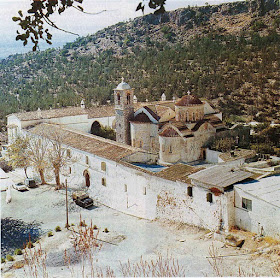 THE LEGEND OF THE LEPER QUEEN
On the northern side of the Pentadactylos mountain range, at the Kyrenia district, very close to the village of Koutsoventi, and below the Castle of Buffavento, the Monastery of Saint John Chrysostom is situated. It is famous for its holy water spring, the water of which cures skin diseases.
According to tradition, in the Castle of Buffavento, which also became the reason for the Monastery of Saint Chrysostom to be built, there lived far from the world, a Queen, who suffered from the incurable illness of leprosy. Her name was Maria di Molino and she was of Venetian origin. Her only company was her beloved lap-dog whο finally also got infected by leprosy.
The dog liked to leave the castle and go out to play. However he started coming back each day wet and on his return the Queen noticed that the dog had begun to heal. Full of curiosity, the Queen asked one of her servants to follow the dog in order to find out where he was going everyday and afterwards return in better health. The servant discovered a water spring beneath the mountain where the dog went to swim. Thus the Queen did the same, and when she was completely cured, she decided to abandon the castle and go to the city and live with her family.
The night, before her departure however, Saint John Chrysostom presented himself in her sleep and asked her to build a monastery in his name. He also asked the Queen to pass the remainder of her life in the monastery. The Queen started to build the monastery immediately and in a few months, the Monastery of Saint John Chrysostomo was finished. She brought monks to live in it, and gave to the monastery much land and money for its maintenance. This Queen stayed in the monastery up to the end of her life fulfilling the wish of the Saint. 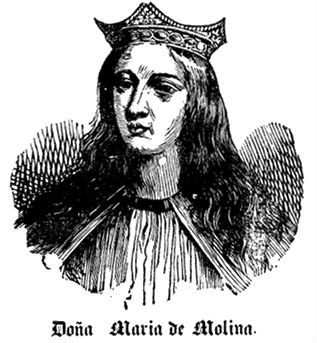 THE TRUTH ABOUT THE LEPER QUEEN
Behind the altar of the monastery is a painting which represents Saint John presenting a man and woman to the Theotokos. According to the inscription at the foot of the picture the man and woman are Antonio and Maria di Molino. Maria di Molino was also buried in the narthex of the church. In all likelihood, these were probably two noble Venetians who lived in Cyprus and were benefactors of the monastery. The story of the leper queen seems to be a fiction, and may have come from a nearby village called Skilloura in Morphou. There it is said that in ancient times a man had a dog that suffered from mange, which was healed after its owner by chance washed it with water from a sulfur spring in the village. This spring still exists in the church there called Panagia Skillouriotissa. It seems the village and the church were named after this incident with the dog (skilos). Perhaps this story influenced the tradition of the leper queen, to account for the mural behind the altar and the tomb in the narthex of the Monastery of Chrysostom, which was interpreted as belonging to the founders of the monastery, though we know the monastery goes back centuries earlier. Though perhaps also there was a healing of leprosy involved to bring about the benefaction. 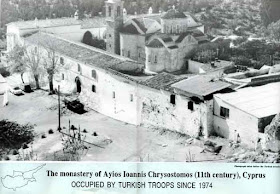 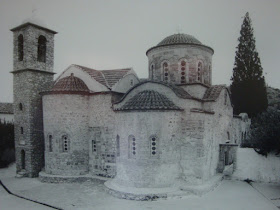 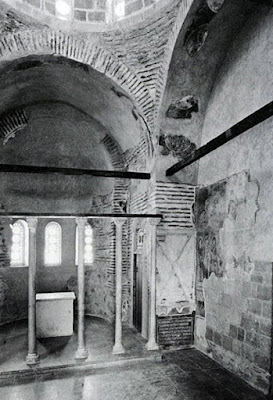 ABOUT THE MONASTERY
The monastery was built during the Byzantine period, likely at the end of the Arab raids in Cyprus, and has two churches. To the north the oldest one can be found which was built in 1050 A.D and was dedicated to Saint John Chrysostom, with murals like the one of the Pantokratoras on the dome, Saint John the Baptist, and the Archangel Micheal. The second church was built in 1891 and was dedicated initially to the Holy Trinity and later to Saint Helen. This church took many icons from the Church of Saint Chysostom because it begun to suffer from deterioration and had fallen to decay.
During the years of Ottoman rule, the monastery was pillaged by the Turks, but was rescued from annihilation, when in the beginning of the 17th century a rich Cypriot and devoted Christian bought it and gave it as a present to the Holy Sepulcher in Jerusalem. From then on it has become a dependency of the Greek Orthodox Patriarchate of Jerusalem. The monastery was once very rich and many outstanding figures of monasticism from Cyprus and Palestine lived there, such as Saint Neophytos the Recluse in the 12th century.
In 1683 there were three priests and eleven monks in the monastery. In 1767 there were ten to twelve monks. And in 1891 there were thirteen monks. It seems like this monastery, since Ottoman times, never was really populated.
Monastic life continued in the monastery up to 1974, but after the Turkish invasion it was looted and pillaged with the monitoring of the occupying troops. Among the treasures stolen from the monastery is the 12th century icon of the Archangel Michael, which is missing. Today the monastery is used as an army camp, and it is a prohibited military area.
Near the Monastery of Saint John Chrysostom, fossils of dwarf elephants and dwarf hippopotamus were found who lived in Cyprus during the Pleistocene period. Also near this area, there are the ruins of the Maronite Church of the Virgin Mary of Koutsoventis, which was built from brick. When the village ceased to be Maronite and the inhabitants became Orthodox the church was left to fall into ruins. It consists of two churches joined together, one with a very large dome which has now collapsed. The interior is completely painted, the east part in an accomplished Byzantine manner, probably of the early fourteenth century, the west parts and narthex with large standing figures of saints, rather later and in a more Syrian style.