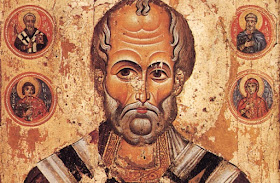 By St. Paisios the Athonite
An elder once told a story about a monk who had gone to Karyes for some errand and had left the door of his cell open, trusting in the protection of St. Nicholas, its patron. When he returned he found that thieves had stripped the cell of everything.
He then went to the church and with courage and in a friendly tone of voice said to St. Nicholas, “Why did you not protect the cell from robbers, my saint? Starting today unless you reveal the robbers, I will not light your lampada.” And he did just as he had threatened.
A few days later the thieves were caught, an evidence of the elder’s faith, confidence, and simplicity, as well as of St. Nicholas’ real presence there. In fact, the robbers humbled themselves and repented, and returned everything they had taken to the elder.
From Athonite Fathers and Athonite Matters.