The Two Earliest Images of Saint Sebastian the Martyr

Perhaps the earliest artistic representation of St. Sebastian is a sixth century mosaic in the Basilica of Sant’Apollinare Nuovo in Ravenna, Italy. One of some twenty-six depicted martyrs, the figures are all identical in expression and lack any distinctive features. 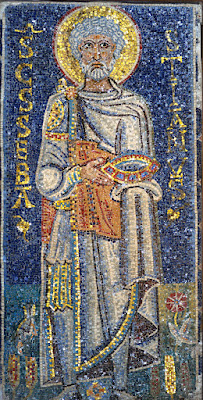 A mosaic in Rome’s Church of San Pietro in Vincoli, probably made in 682 shortly after the plague of 680, shows a grown, bearded man in court dress but lacks any trace of arrows. 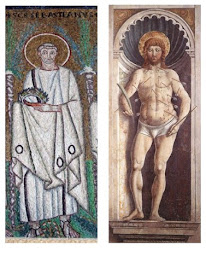 The Saint’s common depiction as a handsome young soldier pierced but not mortally wounded by arrows only first appears around the year 1000 and became especially popular with Renaissance painters, including Rubens (1577-1640), Mantegna (c. 1431-1506) and Botticelli (c. 1445-1510), in response to the Black Death.