The Symbolism of the Three Gifts of the Magi 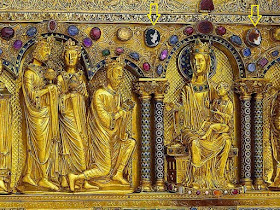 By St. Nikolai Velimirovich
They who fell before the stars and and worshiped them with fear and terror, now with great joy fall to the earth and worship the living Lord, who has come to earth in order to free them from slavery to the stars and faith in blind fate.
And, having discovered their treasure, they brought him gifts: gold, frankincense and myrrh.
They brought him three kinds of gifts, to thereby symbolize unconsciously, the Holy and Life-giving Trinity, in whose name the Child Jesus comes to the people.
They also indicate the three-fold ministry of the Lord Jesus Christ: royal, priestly and prophetic. For gold represents royal virtue, frankincense is priestly, and myrrh is prophetic or sacrificial. So, the Newborn Baby will be the King of the Kingdom of the immortal, will be a sinless Priest and will be a Prophet, who, like most prophets before him, will be slain.
It is clear to all people that gold signifies a king and his kingdom. All clearly know also that incense signifies the priesthood and prayer. And it is clear from Holy Scripture that myrrh signifies immortality, for Nikodemos anointed the dead body of Jesus with myrrh (cf. Jn. 19:39), since dead bodies were anointed to keep them from decomposition and decay as long as possible and to save it from terrible mortal destruction.

The world was illumined by Christ, who shined as the sun; it was filled with prayers and incense, like a temple; and the whole world was filled with the fragrance of his doctrines.
Besides this, the three gifts represent constancy and immutability: gold remains gold, frankincense remains frankincense, and myrrh remains myrrh. Over time, none of them lose their properties, but even after a thousand years, gold shines, incense burns, and myrrh is fragrant.
It was impossible to find on earth three things that would so faithfully symbolize Christ's earthly mission, which would more clearly and eloquently express the constancy and eternality of Christ's work on earth and all the spiritual and moral values that he brought to people from heaven.
He brought truth, he brought prayer, he brought immortality.
What other thing on earth would represent the truth better than gold? Do whatever you want with gold - it will not stop shining.
What other thing on earth would represent prayer better than incense? As incense spreads throughout the temple, so does prayer spread throughout the human soul; as smoke rises upward, so the prayer of the human soul ascends to God. "May my prayer rise before you as incense," says the psalmist. True, other things can be smoked, but no smoke calls the soul to prayer like incense.
And what other thing on earth would represent immortality better than myrrh? Mortality gives rise to stench, while immortality is a persistent fragrance.
And so the Magi from the East symbolically expressed the entire Christian faith, starting with the Holy Trinity and ending with the Resurrection and immortality of our Lord Jesus Christ. Therefore, they were not just admirers but also prophets, prophets of both the Christian faith and the life and ministry of Christ. They could not have known about all this on their own, by their human wisdom, but they knew it by the inspiration of God. Something inspired them to travel to Bethlehem, giving them a marvelous star as a guide.