The Relics of the Three Magi

The Shrine of the Three Kings, also known as the Tomb of the Three Kings or the Tomb of the Three Magi, is a reliquary traditionally believed to contain the bones of the Biblical Magi, also known as the Three Kings or the Three Wise Men. The shrine is a large gilded and decorated triple sarcophagus placed above and behind the high altar of Cologne Cathedral in Germany. It is considered the high point of Mosan art and the largest reliquary in the western world.
According to legend dating to the 12th century, the relics of the Magi were originally situated at Constantinople after being discovered by Saint Helen, but brought to Milan with two small cows which transported a large sarcophagus of marble by Bishop Eustorgius I of Milan in 344, to whom they were entrusted by the Emperor Constans I. Eight centuries later in 1164, Holy Roman Emperor Frederick Barbarossa took the relics of the Magi from the Church of Saint Eustorgio in Milan and gave them to the Archbishop of Cologne, Rainald of Dassel. The Three Kings have since attracted a constant stream of pilgrims to Cologne. A part of these relics were returned to the Basilica of Sant'Eustorgio of Milan in 1904.

Parts of the shrine were designed by the famous medieval goldsmith Nicholas of Verdun, who began work on it in 1180 or 1181. It has elaborate gold sculptures of the prophets and apostles, and scenes from the life of Christ. The shrine was completed circa 1225.
Around 1199, King Otto gave three golden crowns made for the three wise men as a present to the church of Cologne. Because of the importance of the shrine and the cathedral for the later development of the city, the Coat of Arms of Cologne still shows these three crowns symbolizing the Three Kings.
Construction of the present Cologne Cathedral begun in 1248 to house these important relics. The cathedral took 632 years to complete and is now the largest Gothic church in northern Europe.

On July 20, 1864, the shrine was opened, and remains of the Three Kings and the coins of Philip I, Archbishop of Cologne were discovered. An eyewitness report reads:
"In a special compartment of the shrine now there showed - along with remains of ancient old rotten or moulded bandages, most likely byssus, besides pieces of aromatic resins and similar substances - numerous bones of three persons, which under the guidance of several present experts could be assembled into nearly complete bodies: the one in his early youth, the second in his early manhood, the third was rather aged. Two coins, bracteates made of silver and only one side stricken, were adjoined; one, probably from the days of Philipps von Heinsberg, displayed a church, the other showed a cross, accompanied by the sword of jurisdiction, and the crosier [bishop's crook] on either side."
The bones were wrapped in white silk and returned to the shrine. 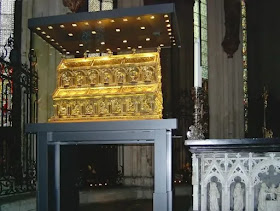 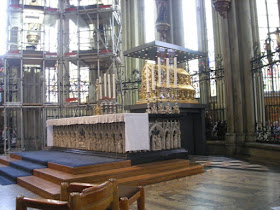