The Miraculous Glass of Saint Spyridon in Jerusalem 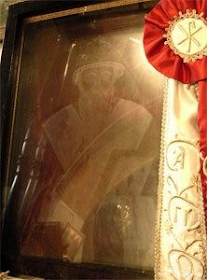 The Monastery of Saint Spyridon is located near the Arab market and the Damascus Gate in the Christian quarter of Old Jerusalem. In the monastery there is an icon of the Saint which was miraculously depicted on glass, a stone with the Saint’s footprint and a piece of his shoe which the Bishop of Kerkyra Athanasios offered as a gift to the monastery in 1886. Among other things in the monastery there is also a stone on which Christ stepped when in his twelfth year of age he started teaching in Solomon’s Temple.
In this monastery is an icon of Saint Spyridon (70 x 50 cm) from the 19th century. On June 2, 1994 this icon miraculously appeared on the glass of a window there in the following manner. 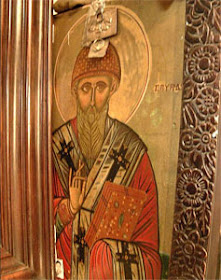 Hieromonk Sophronios was the abbot of the monastery at the time, and he was severely sick. Believing that he was soon to die, he wanted to call for the other monks to give them his blessing and bid them farewell. Suddenly, Saint Spyridon appeared before him and told him that he will not die yet, but will still live for many years. With these words he left the room, but he did not go out through the door, instead he went out through the window. Indeed, Hieromonk Sophronios became well and served in the monastery for another ten years before he departed to the Lord.
However, shortly after the wonderful visit of Saint Spyridon, Hieromonk Sophronios noticed that the window through which the Saint departed now looked muddy. Observing it closely, he noticed that the image of Saint Spyridon was left on the window glass! You can see his shepherds hat and vestments and Gospel book exactly as it appears in the icon. This imprint can still be seen today in the monastery. Now it is stored in a special case in the sanctuary. The background of the image is brown velvet. When you look at the glass from a 30 degree angle, you can see his face.