The Early Christian Veneration of the Mother of God in Rome 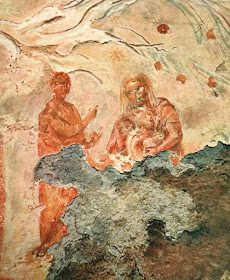 By Prof. Constantine P. Haralambidis
Aristotelian University of Thessaloniki
The Third Ecumenical Synod in Ephesus of 431 marked a memorable milestone in the history of paying honor through adoration to the Theotokos. With the condemnation of Nestorius and the dogmatic proclamation of the Virgin Mary as the Theotokos, we can say a new wave began of God's people honoring through adoration and artistic manifestations the mother of the second person of the Holy Trinity.
The theological success of Ephesus also gave Rome an unusual blooming of events related to the Mother of God. Pope Sixtus III (432–440), the successor of Celestine I (422–432), who bravely fought against the Nestorian heresy, immediately set in motion his grand plans to build the first great building to the Mother of God, the Basilica of Santa Maria Maggiore with its triumphal arch, whose precious mosaics exemplify the divine motherhood of the Virgin Mary. In addition to this monument to the Mother of God, other such monuments were added over the centuries in Rome, such as churches, prayer houses, chapels in the squares, and shrines along the Roman roads. With the architects of these shrines to the Mother of God, artistic professions were established related to it, such as fresco painters, mosaicists, sculptors, goldsmiths and engravers. No city in Christendom has experienced such artistic flourishing of monuments to the Mother of God as Rome in its long ecclesiastical and cultural history.
Of course, all of this happened after the victory of the Church in Ephesus. However, even before the year 431 the Theotokos had her proper share in being venerated by the pious people. The earliest clear testimonies of the Mother of God in Rome are referred to in the texts of Saint Justin the Philosopher and Martyr, from the later half of the second century. This ecclesiastical writer was born in Palestine to pagan parents, but upon converting to Christianity he moved to Rome and established his own school. There he taught biblical truths and was martyred in the year 165, during the reign of Marcus Aurelius. While studying the Old Testament he recognized the prophetic words that proclaimed beforehand the birth of Christ by the Virgin Mary and he compared her with Eve, teaching that Mary is the new Eve who with Christ became the cause of the salvation of all of humanity.
After Justin, whose teaching of the Theotokos was increasingly confirmed by the later spiritual fathers who lived in Rome for more or less the second half of the second century, Irenaeus of Lyon appeared on the theological stage. 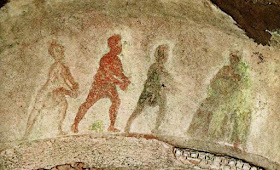 In iconographic representations and inscriptions, the Mother of God is mentioned later on, between the end of the second century and the beginning of the third century. Two of these representations have the privilege of being from early Christian antiquity, such as the frescoes in the Catacomb of Priscilla on the Via Salaria of the Italian capital. The first is in the so-called Cappella greca and depicts the Theotokos seated with the infant in her arms, while the Three Magi urgently present their gifts to the Theotokos. This is a theme repeated many times in the second half of the third century in reliefs of Roman sarcophagi. The second fresco is located in the ancient zone of this catacomb, named Arenario, and constitutes a more unique scene. Despite the remarkable deterioration that this painting presents, we can still recognize the seated Mother of God holding an infant, and to the left a male figure dressed in a garment, holding a scroll in his left hand, and with the right pointing to an eight-pointed star. Some scholars say that it is Isaiah or Balaam, or even David, according to Psalm 109.
These two iconographic representations in the Catacomb of Priscilla are considered early folk art in which is expressed a living love with simplicity of the citizens of early Christian Rome to the Theotokos. These works are not yet representations of mainstream adorational honor. To find the first example of such honor we must go much later to the site of the well-known Basilica of Santa Maria Maggiore from the fifth century.
Source: Translated by John Sanidopoulos.