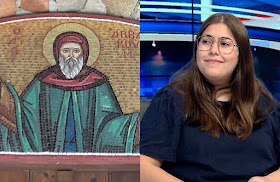 Andrea Markou is a 13 year old Cypriot girl with an enchanting singing voice. However, in February of 2019 she suddenly began to lose her hearing, and could only hear faintly with the help of powerful headphones. Eventually she completely lost her hearing.
Doctors gave Andrea medication to recover her hearing, but she did not expect anything to work. For a period of two weeks, she had absolutely no hearing. Talking on the Greek television program "Mera Mesimeri" on ANT1 about this two week period, she explained what it was like to have complete hearing loss: "Although I was completely in the void, I would hear a voice telling me, 'You will hear,' and I believed I would hear again. This is what I would tell people."
Her desire was to visit the Cypriot village of Fterikoudi, where there was a chapel dedicated to a Saint hardly known outside of the local area - Venerable Avvakum. She said about her visit: "I prayed to the Saint, got oil from his lamp, and with it every morning and night I would cross my ears. I felt that if I did this the Saint would help me. The Saint was telling me (that I would hear)."
When asked if she stopped singing while she was completely deaf, she replied with a smile that normally she should have stopped, but didn't.
Referring to the miracle she experienced, Andrea explained how on a Thursday last June she felt how she would wake up the next day being able to hear. "Someone was telling me that I would wake up and be able to hear," she added.
And this is what happened. In the morning Andrea's mother, Maria, went to wake her up in her bedroom, and realized she was able to hear. This was very happy news to the girl with the enchanting voice. She didn't even need the headphones to hear.
When Maria was asked if she felt also that Andrea would wake up that morning able to hear, she responded positively. She explained how the previous night "we were with her uncle and aunt and were talking about Andrea's issue and about traveling abroad in order to get a second opinion. The doctor's told us they had hoped for a difference with the medication so she could be able to hear with the headphones. As we were eating and discussing these things about Andrea, she told us not to worry because tomorrow morning I will wake up and be able to hear. She must have said this to us at least ten times. She was very optimistic and had a very strong feeling about this. She said that she could hear a voice, that the Saint will help her tomorrow morning, that when she woke up she would be able to hear," said the mother of the 13 year old.

On Facebook Andrea's music teacher Costas Kakoyiannis posted how he experienced a miracle through his student, a miracle of a Saint, something which until now he believed was a fairy-tale, or something made up by priests to draw people to church. He was the first to hear about the miracle, and they happily sang a Christmas song together.
Concluding, Mrs. Markou spoke emotionally how on Monday the 2nd of December is the feast day of Venerable Avvakum, and she invited people to go to his chapel to light a candle towards his grace.
It should be noted that there are many recorded instances of Venerable Avvakum healing those who have hearing problems. It was by reading a book of these miracles that Andrea's faith was aimed towards the healing power of the Saint. The chapel is built over the place where he was buried, having lived as an ascetic nearby many centuries ago.