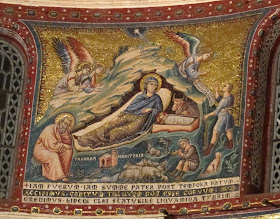 Homily on the Nativity of Christ
Sermon 22
By St. Leo the Great
I. The mystery of the Incarnation demands our joy
Let us be glad in the Lord, dearly-beloved, and rejoice with spiritual joy that there has dawned for us the day of ever-new redemption, of ancient preparation, of eternal bliss. For as the year rolls round, there recurs for us the commemoration of our salvation, which promised from the beginning, accomplished in the fullness of time will endure for ever; on which we are bound with hearts up-lifted to adore the divine mystery: so that what is the effect of God's great gift may be celebrated by the Church's great rejoicings. For God the almighty and merciful, Whose nature as goodness, Whose will is power, Whose work is mercy: as soon as the devil's malignity killed us by the poison of his hatred, foretold at the very beginning of the world the remedy His piety had prepared for the restoration of us mortals: proclaiming to the serpent that the seed of the woman should come to crush the lifting of his baneful head by its power, signifying no doubt that Christ would come in the flesh, God and man, Who born of a Virgin should by His uncorrupt birth condemn the despoiler of the human stock. Thus in the whole and perfect nature of true man was true God born, complete in what was His own, complete in what was ours. And "ours" we call what the Creator formed in us from the beginning and what He undertook to repair. For what the deceiver brought in and the deceived admitted had no trace in the Savior. Nor because He partook of man's weaknesses, did He therefore share our faults. He took the form of a slave without stain of sin, increasing the human and not diminishing the Divine: because that "emptying of Himself" whereby the Invisible made Himself visible and Creator and Lord of all things as He was, wished to be mortal, was the condescension of Pity not the failing of Power.
II. The new character of the birth of Christ explained