Verses
Nicholas beheld the throne,
Having given the world, he received it.
Saint Nicholas II Chrysovergis was Ecumenical Patriarch of Constantinople from 979 to 991.
In 976, while Metropolitan of Adrianople, Nicholas accepted the confession before the death of Emperor John I Tzimiskes.

According to the testimony of the 11th century historian Yahya of Antioch, Metropolitan Nicholas was appointed Patriarch of Constantinople in the fourth year of the reign of Basil II, that is, February 12, 979. Some believe he was appointed in 984.

In 987 Prince Vladimir sent envoys to Constantinople to inquire about the Orthodox faith, attending the Divine Liturgy in Hagia Sophia in all its splendor officiated by Patriarch Nicholas II. Their report to Vladimir was as follows: "We knew not whether we were in heaven or on earth. For on earth there is no such splendor or such beauty, and we are at a loss how to describe it. We only know that God dwells there among men, and their service is fairer than the ceremonies of other nations. For we cannot forget that beauty. Every man, after tasting something sweet, is afterward unwilling to accept that which is bitter, and therefore we cannot dwell longer here." 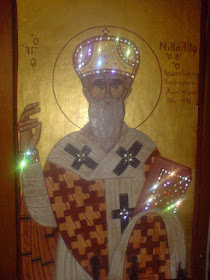 It was during the tenure of Patriarch Nicholas II that Russia was Christianized and he appointed the first Metropolitan for Russia, Michael the Syrian, to accomplish this mission with six other Bishops.
In 991, Patriarch Nicholas II in the presence of Emperor Basil II and the Russian ambassadors served in the Church of Hagia Sophia in Constantinople.