Venerable Anthony of Siya, in the world Andrew, was born in 1479 into a family of rich farmers in the village of Kekhta near the North Dvina River. In childhood he received a fine education, read much and learned iconography. After the death of his parents, Andrew went to Novgorod, and for five years worked for a boyar [nobleman] there. He later married, but his wife died after a year. 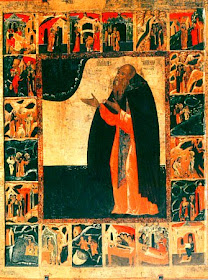 Then Andrew decided to devote himself to monasticism. He distributed his goods to the poor and as a wanderer came to the Pachomiev Wilderness Monastery at the River Kena. Saint Pachomius tonsured him with the name Anthony. Soon he was ordained a hieromonk, and Anthony, with the blessing of the abbot, celebrated the divine services by himself. 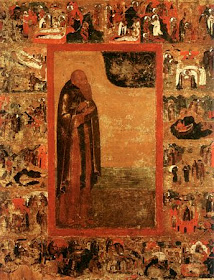 He went out with the other monks of the monastery to work for the monastery’s needs. Out of love for solitude Saint Anthony eventually left the Pachomiev wilderness, after choosing two companions from the monastic brethren, and he settled upon Mikhailov Island, on the one side washed by the River Siya, and on the other, by encircling lakes. 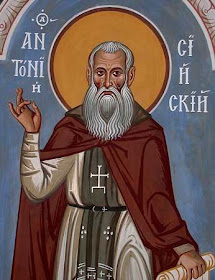 In this harsh frontier within the dense thickets Anthony built a chapel in 1520. But to clear the forest required difficult work, and Anthony’s companions began to grumble against him. Then quite unexpectedly an unknown man furnished them with the means of subsistence, offering money for good measure. The Siya Monastery became famous, and inhabitants of surrounding villages often visited it. 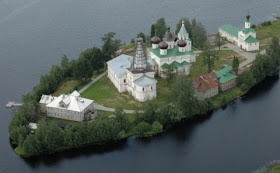 And again Saint Anthony, taking one disciple, withdrew to a still more remote place on Lake Palun. There, in a solitary cell, he dwelt for three years. When the abbot Theoctistus refused to guide the Siya Monastery any longer, the brethren tried to persuade Saint Anthony to return to them. He finally acceded to the request of the monks, again became abbot and piously guided the monastery until his death in the year 1556, when he was seventy-nine years old.

Apolytikion in the First Tone
You renounced the world in favor of the spirit, seeking the one God with your whole heart, O Anthony. You retreated to a far wilderness, near waters, in tears and labors living the angelic life. You gathered a multitude of monks in your wisdom. Visit them and cease not to implore the Holy Trinity to deliver us from evil, and to save our souls.
Kontakion in Plagal of the Fourth Tone
From your youth you exhausted your flesh by fasting and prayer, and taking up your cross, you followed Christ. Having joyfully completed your journey to heaven, you stand with the saints before the Holy Trinity. Now visit your flock and remember those who honor you, that all the faithful may cry out in thanksgiving: Rejoice, O wise and venerable Anthony, guide of desert-dwellers.