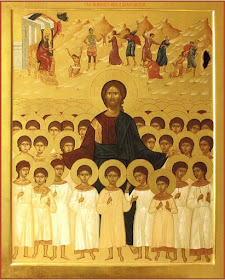 By St. Nikolai Velimirovich
Herod, seeing himself ridiculed by the Magi, was very angry, and sent to have all the infants two years old and under slaughtered in Bethlehem and its surrounding borders, based on the time he learned from the Magi. The Magi from the East did not actually fool Herod. They did not promise him anything. For it is said in the Gospel: They, having heard the king, went. But the tyrant Herod was accustomed to having his will fulfilled by everyone. Therefore he considered it a mockery that the Magi did not return to Jerusalem to inform him of the Divine Child.
He was therefore very angry. Anger was the air he inhaled and exhaled every day - which always, without exception, happens to people who are enslaved to their passions. We can feel it in ourselves: the more we indulge in any passion, the more we become children of anger. And anger is the father of murder, for in the end it leads to murder. Cain killed his brother Abel in anger (Gen. 4:5). Saul was angry with his son Jonathan and threw a spear at him to spite him (1 Sam. 20:30-33). King Nebuchadnezzar was angry with the three youth: Shadrach, Meshach, and Abednego, and commanded them to be thrown into a red-hot furnace (Dan. 3:19-20). The high priests and scribes of Judah, listening to the archdeacon Stephen, were torn at their hearts and gnashed their teeth at him, and unanimously rushed at him, and, leading him outside the city, began to stone him (Acts 7).
Herod, the servant of all the godless passions on earth, was enraged, and in anger sent his executioners, and slaughtered all the infants of Bethlehem and its surrounding borders, all the infants who were two years old and below. What Pharaoh once did with the infants in Egypt, Herod is now doing with the infants in Bethlehem. This often happens with us: we ourselves fall into the sin that we condemn in others.
The Evangelist put all the blame for the bloody deed on Herod who gave the order, and not those who executed the command. Before God, it was Herod who was responsible, not the executioners. This plan of the devil probably would not have entered the mind of the executioners - to slaughter so many innocents infants in order to kill the one who was interfering with them. All fault falls only on Herod. The Evangelist wants to teach us this also: beware of doing evil even through other people. If we persuade someone to kill, it is us who kill, not them; if we persuade someone to lie, then we did it, not them;if we persuade someone to steal, then we stole, not them; if we persuade someone to fornicate, then we are the fornicators, not them. No matter what sin we incline a person to, we are the sinners, not them. The Evangelist does not even call them executioners, he doesn't call them anything at all. He simply says that Herod sent for the slaughter of the infants. It doesn't speak of whom he sent, but that he sent them. This is because it doesn't matter who Herod sent, only that it was herod who sent, and he will be accountable for this crime at God's judgment.
That many children died in the bloodshed arranged by Herod, can be seen from the fact that the Evangelist emphasizes that he sent for all the infants of Bethlehem and its surrounding borders to be slaughtered who were two years old and under. He could have said that he sent for the slaughter of all the infants within Bethlehem two years old and under, but he intentionally points out that it was all the infants of Bethlehem and its surrounding borders, since Bethlehem is a city with quite a few villages, therefore many children were killed. 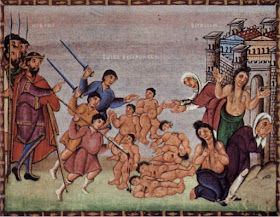 Thus the first martyrs for Christ were children. Their premature martyrdom is explained by the abyss of human sin, but they are justified with a crown of glory and immortality in the Kingdom of Christ. Those whom Christ loved most were the first to suffer for Him. Those whom He later embraced and blessed (Mk. 10:16) were the first to take part in New Testament martyrdom. In the Old Testament, prophets perished for God; in the New Testament, children and all those who are as pure as children perish for God. For the commandment of the New Testament is: if you do not change and become as children, you will not enter the Kingdom of Heaven (Matt. 18:3). But all those who change and become as children will meet their Herods, more or less bloodthirsty, who out of envy will beat them and drive them away, and even kill them.
Not a single martyr for Christ will be left without their crown in the Kingdom of Christ, and not a single Herod will escape the fierce execution, just as King Herod could not escape it either on earth or in heaven. Indeed, every armed sinner is cruelly deceived into thinking that they are stronger than an innocent baby. There is nothing in the world stronger than purity and innocence. For behind the pure and innocent are angels of God with fiery swords. And we all are often deceived when, blinded by sin, we think that we, with our strength, power and arms, are stronger than one weak two year old baby. You just need to hear the confessions of the murderers - and shudder! It is necessary to hear how the murdered children pursue their murderers day and night, in reality and in dreams, never giving them peace and quiet, until they lead them either to repentance or the noose. The one who killed the innocent killed himself. Those who die innocent are saved and victorious. Kings are not strong, but children are. Kings are not victorious, but children are. This is great news for a decrepit world. This is the main principle of the New World of Christ.
The first example of the curse of rapists and the blessing of tormented babies in the New Creation is Herod and the slaughtered children of Bethlehem. Since the Holy Gospel is being read, day after day, curses are being poured out on Herod, while on his innocent victims - a blessing. And what did Herod achieve by his crime? None of all that he wanted, yet all that he deserved. According to God's providence, sometimes the villain is executed immediately after the crime, and sometimes later, but always unexpectedly. For the Lord does not forget the cry of the oppressed: "For the Avenger of bloodshed remembers; He does not ignore the cry of the afflicted" (Ps. 9:12). When the evil father of Saint Barbara brought his daughter to execution for believing in the Lord Jesus Christ, and with his own hand cut off her head, on the same day lightning struck his house and killed him. When King Herod slaughtered the innocent Bethlehem infants, lightning did not immediately hit him, but something even more terrible happened to him. He soon became bedridden and fell into a terrible and prolonged illness, with fevers, ulcers and bleeding. But the worst thing was the disease of his genital organs. As his biographer writes (Josephus, Book 1), these organs decayed and numerous worms began to breed on them. The killer of children was punished with the most terrible torment in those organs of the human body, which God designed for childbearing. The stench emanating from Herod dispersed everyone from the royal palace. And in solitude, bodily suffering, and finally madness, Herod let out his black soul.
From Conversations Under the Mountain.