Why A Certain Priest Refused To Read A Newspaper 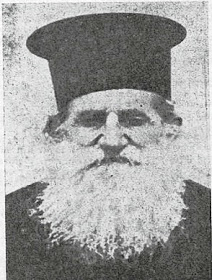 Father Gabriel Frangoulis (1868-1943) was a simple priest from Patras, Greece who in many ways personified an ideal image of a parish priest. Before becoming a hieromonk he was a farmer with the name Philip. During the Balkan Wars of 1912 and 1913, he was the pastor in the village of Agios Ilias. While serving there, he became very much involved in politics and excited about the national restoration of the Greek people and nation. Every day he would run to Myrtia Railway Station to buy a newspaper, and would absorb the news of the victorious advance of the Greek army into Macedonia and Epirus, feeling boastful with national pride. And when he read about the Bulgarian advance into Thessaloniki and the threat posed for the city, he would become inflamed and feel like he was going to burst. "Oh, if I was only there right now, I would crush some of them," he would say to himself. But when he internally realized what he was saying, he felt disturbed in his soul, and he heard a loud voice rebuke him: "Shame on you, Gabriel! What are you saying, as a clergyman! From now on, you will never read a newspaper again."
And Father Gabriel strictly adhered to this prohibition that he imposed on himself as a penance. An acquaintance of his relates the following story: "In August of 1939 I found Father Gabriel at Gerokomeio Monastery, and I read that we were at the eve of war. Hitler's words and his name were known everywhere. We arrived that evening, and Father Gabriel invited me into his cell. 'That man Hitler, who is he with, my child? Is he with the British?' he asked me. 'No, Elder, with the Germans,' I replied. 'May God enlighten him,' he said with a sigh. 'Why, my father, do you not know these things? How do you not know Hitler is a German? Don't you read the newspaper?' I asked. 'Hmm...I'm punished' he replied with a laugh. He took a deep sigh and told me the reason for his punishment. Finishing up, there was a knot in his throat. 'For I know my iniquities, and my sins are ever before me,' he whispered. His eyes became teary and he rushed to finish. 'Since then I have imposed a penalty, a penance on myself to never again read a newspaper. And I haven't even ever again put one into my hands. Since then I have been punishing myself.'"
When Father Gabriel wasn't in church, he was at the local coffee shop where the people were. He was always trying to be beneficial to people, to help calm their souls, to pacify them, to quench their spirits inflamed with political passions. He didn't want anyone to be burdened. In those years the priests were not paid by the state, they were supported by offerings of the faithful. Many people gave Father Gabriel money, but he would immediately give it away to those in need, keeping nothing for himself. When he died, he wasn't even buried in his priestly vestments, because he had given them away to a poor priest that needed vestments for himself. When he was asked what he would be buried in, he replied: "Do you think God will not recognize I'm a priest if I don't wear my vestments? I tell you, He will recognize me. I will go therefore with my black cassock."
From Synaxarion of the 20th Century (Greek), vol. 10, Translation and editing by John Sanidopoulos..