The Heart in the Hesychastic Treatises of St Gregory Palamas 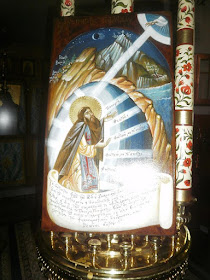 The Heart in the Hesychastic Treatises of St Gregory Palamas
By Monk Vartholomaeos
Introduction
In a Russian village not so long ago, a pious middle-aged Russian woman, striving to live a conscientious Christian life, went to see her priest for confession. Having listened to her for a while, and perceiving her general instability of thought and therefore also life, the elderly priest took a small metal cross into his hand, and in a friendly, but stern manner, struck the woman twice upon the head saying, ‘you silly woman, go inside, go inside, and you will find rest’. This unorthodox behaviour of the confessor, in a strange way, is a most practical and direct way to express what we mean by the term Hesychasm.
When one speaks about the heart, in an Eastern Christian context, one is somewhat obliged to talk about Hesychasm also. Furthermore, when one is talking about Hesychasm, St Gregory Palamas inevitably enters the equation. The heart possesses a centrality few can claim. If one accepts that man is the centre and crown of creation,1 it would not be an exaggeration to say that the heart is at the centre of the world. If this can be applied to the material world, even more so does it appertain to the spiritual. For the heart is the meeting point between the Creator and creation, between God and man. St Augustine asks the following question. ‘Where can we find God?’, and continues in answer, ‘not on earth, for He is not here. And not in heaven, for we are not here. But in our own hearts we can find Him.’2
St Gregory Palamas was a prolific writer. It was not until the second half of the previous century that his works were finally compiled and published by Professor Panagiotis Christou in Thessalonica, the city were St Gregory served as Archbishop. It is a voluminous corpus consisting of theological treatises, letters, ascetic writings, homilies, and prayers. I have chosen to focus on three of his works: the Treatises in Defense of those who Practice Holy Stillness3 (1338-40), commonly termed the Triads due to their structure, for they consist of three sets of triple tracts. This is, indisputably, St Gregory Palamas’s most important theological work.4 And another treatise To the Most Reverend Nun Xenia (1345/6), a statement of traditional Orthodox asceticism,written at Xenia’s request. And finally, for obvious reasons, one of Palamas’s briefest works, On Prayer and the Purity of Heart (1336/7).
Read Complete Text