The First Church Built in Honor of Saint Nektarios

The first church built in honor of St. Nektarios the Wonderworker was built by Protopresbyter Nikolaos Meletides in the early 1960's in Kymina, Thessaloniki. This church contains the priestly stole of St. Nektarios from Aegina as a sacred relic and the shrine has become a source of many miracles for the faithful of the region of Macedonia and elsewhere. 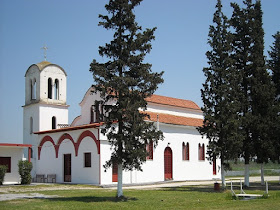