Saint Theodore, the first Archbishop of Rostov, in the world John, was the son of Stephen (brother of Saint Sergius of Radonezh), who occupied an important post under Prince Andrew of Radonezh. Left a widower, Stephen became a monk, and together with his twelve-year-old son, he went to the Monastery to Saint Sergius, who foreseeing the ascetic life of the child John, tonsured him with the name Theodore on the feast of Saint Theodore the Hair-Shirt Wearer (April 20). In the monastery he learned the Greek language and how to paint icons.
After Theodore attained an appropriate age, he was given a blessing to be ordained to the priesthood. With the blessing of Saint Sergius, Saint Theodore built a church in honor of the Nativity of the Most Holy Theotokos and founded a monastery on the banks of the River Moskva, at the place called Simonovo. Soon the monastery began to attract a throng of people. Saint Theodore built a cell five versts from the Moscow Kremlin, and pursued new ascetical labors, and here disciples gathered around him. Saint Sergius, visiting this place, blessed the founding of a monastery, and Metropolitan Alexis blessed the construction of a church in the name of the Dormition of the Most Holy Theotokos at Novoe Simonovo, which also had its foundations laid in 1379. The old Simonov Monastery remained the burial place of monks. 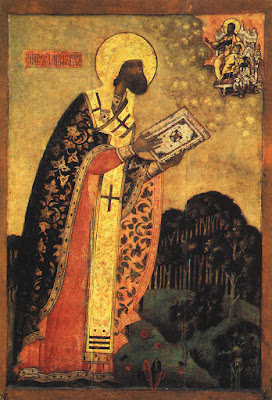 Because of his virtuous life and strict asceticism, Saint Theodore became known in Moscow. Metropolitan Alexis elevated him to the rank of abbot, and Great Prince Demetrius of the Don chose him as his father confessor. Saint Theodore journeyed to Constantinople several times on church matters for the Russian Metropolitan. On his first journey in 1384, Patriarch Nilus made him an archimandrite. The new Simonov Monastery was put directly under the Patriarch, thus becoming stavropegial. In 1387, he was consecrated archbishop and occupied the See of Rostov. At Rostov, Archbishop Theodore founded the Nativity of the Theotokos Monastery.
Being the abbot, and then the archimandrite of the Simonov Monastery, and despite being occupied with churchly matters, Saint Theodore stalwartly guided those in the monastic life and counted many great and famous ascetics among his disciples. Saints Cyril (June 9) and Therapon (May 27), the future founders of two famous White Lake monasteries, were tonsured at the Simonov Monastery. Saint Theodore occupied himself with iconography, and he adorned with icons of his own painting both the Simonov Monastery, and many Moscow churches.

The blessed repose of the Saint occurred on November 28, 1394. His relics are in the Rostov Dormition Cathedral. Already in the fifteenth century he was revered as a Saint. However, in the nineteenth century, for an unknown reason, his general veneration was discontinued. It was resumed only in 1912.