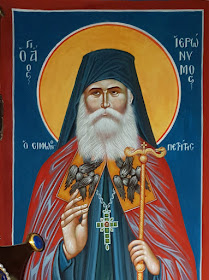 When the Ecumenical Patriarchate announced the official canonization of Elder Hieronymos of Simonopetra on November 27th, with a feast day established for May 9th, Simonopetra Monastery celebrated the announcement and venerated their spiritual father of many years with great honors. The Saint entered this monastery when he was 17 years old and lived there for 43 years, serving as abbot from 1920-1931. He was then exiled to the Monastery of the Ascension in the town of Vyronas southeast of Athens, at the foot of Mount Hymettus, which is a dependency of the Simonopetra Monastery, where he reposed on January 6, 1957.
Upon hearing of the announcement, Simonopetra Monastery and its dependency the Monastery of the Ascension (as well as all the monasteries and churches under Simonopetra), began ringing their bells to express their joy for an hour. Then a procession was formed at Simonopetra by the Athonite monks with the head of the newly-glorified Saint Hieronymos and his relics and icon. The head of the Saint had been placed in the Chapel of Saint Mary Magdalene by Elder Aimilianos of Simonopetra, who recently reposed on May 9, 2019.
Following the procession, the head of the Saint was placed in the katholikon of the monastery for veneration, while the rest of the relics and icon of the Saint as well as his staff were placed on the abbot's chair by the current abbot Archimandrite Elisaios. It should be noted that the Saint faced many difficulties at this monastery and was exiled, so this act was an act of restoration and seeking forgiveness from the Saint. A similar action was taken when the relics of St. John Chrysostom, who reposed in exile, were returned to Constantinople under his successor St. Proclus.
With the completion of the procession, a Doxology was chanted and Festal Great Vespers was celebrated composed to honor Saint Hieronymos by Hieromonk Athanasios, a monk of Simonopetra and a hymnographer of the Great Church of Christ. Then, after a Festal Matins Service a Festal Divine Liturgy was celebrated, with the Abbot of Simonopetra wearing the vestments of Saint Hieronymos. 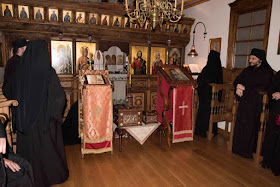 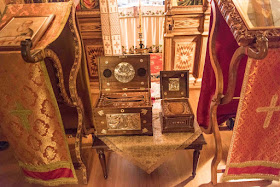 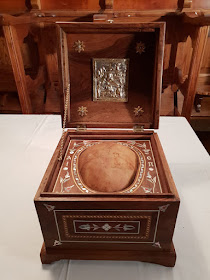 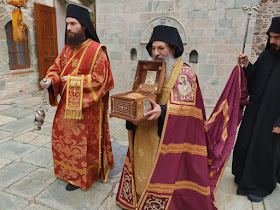 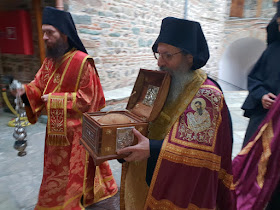 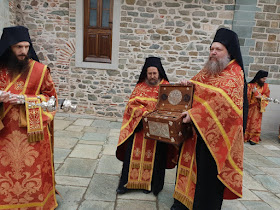 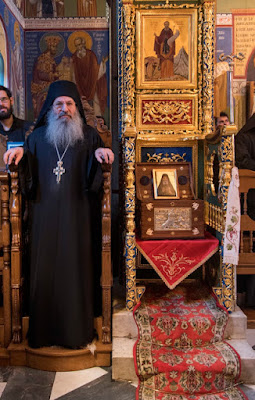 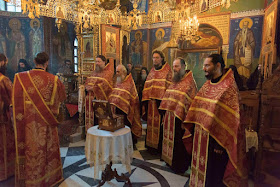 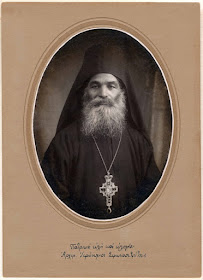 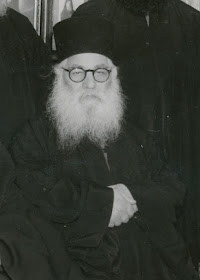 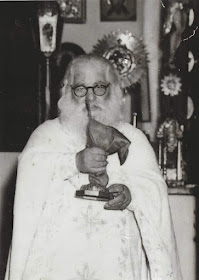