Saint Abibos of Nekresi was one of the Thirteen Syrian Fathers who arrived in Georgia in the 6th century under the leadership of Saint John of Zedazeni.
With the blessing of his instructor, Saint Abibos began his apostolic activity in Nekresi, a village set among the hills in the eastern region of Kakheti. For his virtuous deeds, Saint Abibus was soon consecrated bishop of his diocese.
According to the chronicle Life of Kartli, Saint Abibos converted not only Georgians but also most of the mountain tribes — including the Dagestani/Didoians — to the Christian faith. Abounding with apostolic zeal, Saint Abibos journeyed throughout the villages of his diocese, preaching the truth and calling upon all to strengthen the true faith. 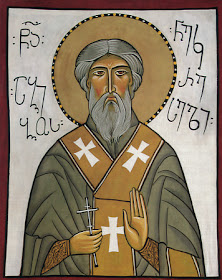 The time that Saint Abibus was serving as bishop coincided with a dark period of Persian rule in eastern Georgia. The Persians exerted every effort to implant their Zoroastrian faith — the worship of fire — and everywhere erected altars where the fire burned without ceasing.
Once in the village of Rekhi the holy hierarch, finding a group of fire-worshipers forcing the Georgian faithful to worship the flame, poured water on their fire to extinguish it. The enraged pagan priests bound Saint Abibos, beat him cruelly, locked him up, and reported the incident to the marzban. The marzban ordered that the bishop be brought to him at once. 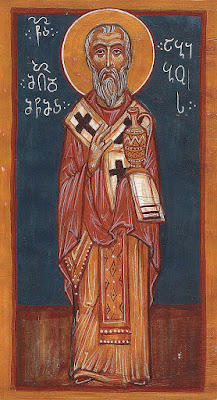 Saint Abibos was a friend of the holy wonderworker Symeon the Stylite of the Wonderful Mountain. Saint Symeon received a sign from God of the imminent martyrdom of Saint Abibos and, in order to console him, sent him a letter, an evlogia (a blessing — probably a piece of prosphoron or some other holy object) and a staff. While Abibos was being escorted to the marzban, in the village of Ialdo he met a messenger from Antioch who presented him with Saint Symeon’s gifts. The letter and gifts gladdened the holy hierarch and strengthened him for his martyrdom. Then Saint Abibos was approached by a group of Christians who offered to help him escape, but he graciously declined.
Having arrived in Mtskheta, the Saint prayed at Svetitskhoveli Cathedral, then requested that the guards permit him to meet with Saint Shio of Mgvime. The Persians granted his request, and the spiritual brothers greeted one another with love and prayed together to the Lord. 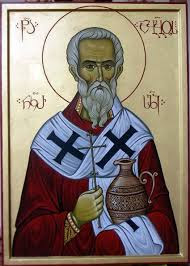 Saint Abibos was brought before the dread marzban and asked how he could dare raise his hand against the Persian god. He replied with complete composure, saying, “I did not kill any god; rather I extinguished a fire. Fire is not a god, but a part of nature, which is created by God. Your fire was burning wood, and a little water was enough to extinguish it. The water turned out to be stronger. Your fury amazes me. Isn’t it humiliating to call something a god which has no soul?”
Furious at this response, the marzban ordered the holy hierarch’s execution. 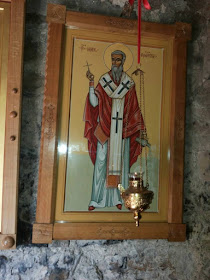 The executioners mercilessly beat the blessed Abibos and shattered his skull with stones. Then they dragged his body through the city, cast it to the beasts, and assigned a guard to ensure that the Christians did not come to steal it. Nevertheless, that night the priests and monks of Rekhi came, took the body of the holy martyr, and buried it with great honor at Samtavisi Monastery (located midway between Mtskheta and Gori). 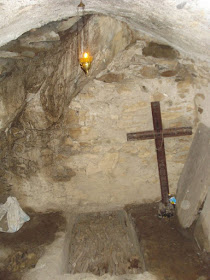 Many miraculous healings have taken place over the grave of Saint Abibos. During the rule of Prince Stepanoz of Kartli, the incorrupt relics of Saint Abibos were translated from Samtavisi to Samtavro Monastery in Mtskheta, according to the decree of Catholicos Tabori. They were buried under the holy altar at Samtavro Church.
His feast day had been kept on November 12 through 1700, but later changed to November 29. The Nekresi Monastery was closed down shortly after the Imperial Russian takeover of the Georgian Church in 1811. On January 7, 2000, the Nekresi Monastery was restored.