Church of Saint Matthew of the Sinaites in Heraklion, Crete 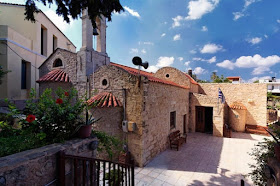 Approximately 500m south of the Cathedral of Saint Menas, within the historic district of Heraklion, is the Church of Saint Matthew of the Sinaites. The present building dates back to just after the earthquake of 1508. However, the earliest references in the lists of churches of Candia (Crete), state that the first temple goes as far back as the second Byzantine period. Regarded as “Great and Unique”, the Church of Saint Matthew was inextricably connected with the life of the city.
During the first Ottoman period of Megalo Kastro (Grand Castle) all members of the Christian community attended its services, as the Monastery of Saint Katherine of Sinai which was a dependency of Saint Katherine's in Mount Sinai was converted by the Turks into a mosque, and it was the only church in operation at the time in the area. Because of this, the monks of Mount Sinai moved their monastery to the Church of Saint Matthew, which was expanded into a dependency over time. The seat of the Archbishop, as well as the paintings and pulpits that until then adorned Saint Katherine's had been transferred. However, we cannot state with certainty today whether the school of iconography of Saint Katherine operated within its grounds during this period, though it was housed there until its relocation to the small Church of Saint Menas around 1750. The school itself continued to function because of the father and son painters Kastrofilaka, and by J. Kornaro who had attended the school.
Today the temple hosts a remarkable collection of icons; including important examples of the Late Cretan school of Iconography such as “The Crucifixion” by George Kastrofilakas 1752. “St. Titus” with scenes of his life. "Ten Martyrs of Crete” by John Kornaro 1773. But most importantly are those predominantly of the Cretan School of Iconography: two unsigned icons by Michael Damaskinos; “St. Symeon the God-Receiver “and “St. Katherine” by Jeremiah Palladas, “The Crucifixion” attributed to Palaiokappa together with other famous artists as well as several unsigned icons from earlier times.
In crypts within this church are also the remains of many of those slaughtered in the Massacre of August 25, 1898. 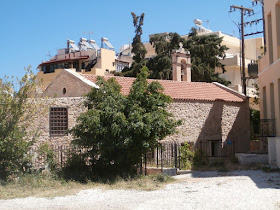 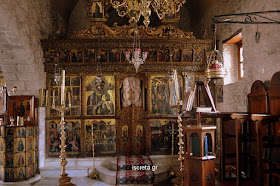 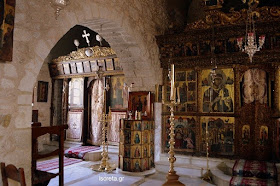 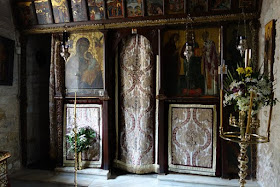 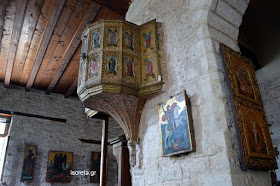 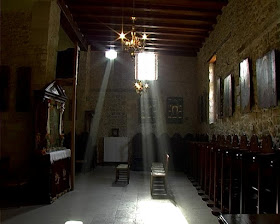