A Clarification on the Ascension of Enoch and Elijah by St. Gregory Palamas 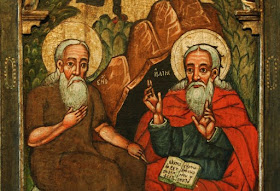 By St. Gregory Palamas
Today the Lord not only stood with His disciples after His resurrection, but was also parted from them and was taken up into heaven as they watched, ascended and entered into the true Holy of Holies and sat down on the right hand of the Father, far above all principality and power and every name and honor that is known and named, either in this world, or in that which is to come. There were many resurrections before Christ’s resurrection, and similarly, there were many ascensions before His ascension. The Spirit lifted up Jeremiah the prophet, and an angel took up Habakkuk. In particular it is written that Elijah went up with a chariot of fire. But even he did not go beyond the realms of earth, and the ascension of each of those mentioned was just a sort of movement lifting them up from the ground without taking them out of the area surrounding the earth. Similarly, the others who were resurrected all died and returned to the earth. By contrast, Christ has risen and death no longer has dominion over Him, and now He has ascended and sat down on high, every height is below Him and bears witness that He is God over all.
- Homily 1 on the Ascension of Christ
God carried away Enoch too, but did He take him to Heaven? Certainly not! For "no man hath ascended up to Heaven, but He that came down from Heaven." ... If, however, it is written that Enoch was moved to somewhere on earth by God, he was clearly taken to a lesser place than that now allotted to the Virgin, for nowhere on earth is more sacred than the Holy of Holies.
- Homily 2 on the Entrance of the Theotokos into the Temple