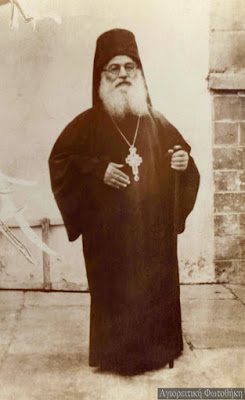 By Alexandros Christodoulou
Childhood Years (1871-1888)
Elder Hieronymos was born in the village of Reïz-Dere in the Krini region of Asia Minor in 1871 to poor yet pious parents, Nicholas and Maria Diakogiorgis.
The village was entirely Christian and was five kilometers northeast of Alatsata [Alaçatı] and two and a half kilometers from the sea. Most of the inhabitants were farmers or vine-growers and had come originally from Crete or the Peloponnese.
At his baptism, he was given the name John. When he went to school he was a good student, surpassing the others in intelligence and maturity. As soon as he completed Primary School, the teacher sent him to the neighboring little town for a short time to work as a teacher.
The village church became the center of his life. It was here that he found what his soul was looking for: joy and God’s blessing, which were poured out upon him through the sacraments, prayers and services. He loved the services, the priests, the singers, the vigils and the chapels. He assisted the singers in the choir and the priests in the altar. He seemed to be older than he actually was because of his silence, seriousness and piety.
As a child of poor parents, he knew hardships from an early age, and later, as a monk, he would undertake these voluntarily and faithfully. We know very little about his childhood, but his mother clearly left the imprint of her love on him. It was from her that he first heard the lives of the saints, that he learned to fast, to pray and to love God. The saints were among his first friends. His family often discovered that he would go missing, but they knew they would find him in the chapels. He was cured by Saint Demetrios on two occasions: once when he had terrible pains in his legs and again when he had chicken-pox. Both times he stayed in the church of the Saint for forty days and fasted.
One evening, he heard his sister saying the Salutations to the Panagia. In the morning, she asked him if he knew the Salutations. When he said that he didn’t she told him: "Now is your chance to learn." "From the age of seven I knew the Salutations by heart," the Elder would later say.
His mother’s great faith became apparent before her death when she donned the monastic schema, which she loved since her childhood. She was renamed Melania. His brother became a monk with the name of Maximos and there were three nuns in the family, Magdalene, Melania and Kassiani, two of whom had previously been married. He also had more distant relatives who entered monasteries on the Holy Mountain or other parts of Greece.
At the age of twelve, he went to Chios with three other young boys to see the famous, discerning Elder, Saint Parthenios. The Elder was bent double and completely covered, so that the flesh on his face and hands wasn’t visible. He lived in great asceticism in a cave next to the monastery of which he was the founder. He welcomed them by name, even though it was the first time he had seen them. He told each of them the path they would follow in life, and was happy to tell John that he would become a monk.
Fr. Hieronymos later wrote: "During my teenage years, I would think about how I could please the Lord. I chose the good and God-pleasing life of the monks because it’s best suited to anyone wanting to follow the Lord with patience and devotion. He Himself says 'Come to me all of you who are weary and heavy-laden and I will give you rest.' After receiving my father’s blessing and the best wishes of my parents, as well, of course, as the Cross of the Lord as an invincible weapon, I went to the Holy Mountain of Athos, since this this was the most suitable place and in accordance with my God-pleasing aim and decision."
His father told him: "Go and don’t come back." He said this because some would go but would then return home. He wanted his son to be serious.