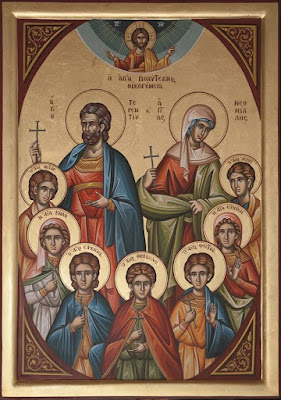 On the 28th of this month, we commemorate the Holy Martyrs Terence and Neonilla who were yoked together, and their children Sarbelos, Nita, Hierakos, Theodoulos, Photios, Bele and Eunike.
Verses
The twofold couple with their seven children,
Were led to the honor of being decapitated by the sword.
On the twenty-eighth Terence endured beatings.
They all lived in the same household, as one family, where they secretly worshiped God. They were accused before the governor and stood before his judgement seat. Because they confessed Christ as the true God, they mocked the idols, and for this they were suspended, where they were lacerated without mercy. On their wounds they were sprinkled with the most bitter vinegar and salt, while underneath they were being burned with a fire. Having suffered these things, the Saints prayed, and with a quiet voice they urged one another on towards martyrdom. The Lord did not overlook their prayers, but invisible Angels were sent to free them from their bonds, and to heal their wounds. When the impious ones saw this, they were together astonished and afraid. The Saints were then cast into prison. 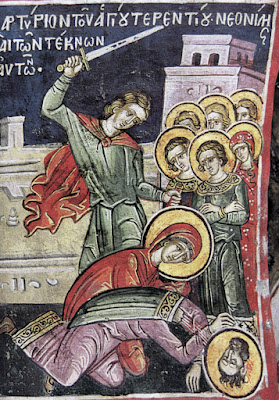 The next day they were beaten with thick rods. Then they were tied to wheels and beaten without mercy. By the grace of God they remained unharmed, and were given as food to the wild beasts. Again they were kept unharmed, so they were put into large cauldrons full of boiling pitch. The boiling pitch - O the miracle! - was immediately changed into water. When the impious saw this, how the Saints were kept unharmed during their tortures, they cut off their heads with a sword. In this way the blessed ones received crowns of martyrdom. 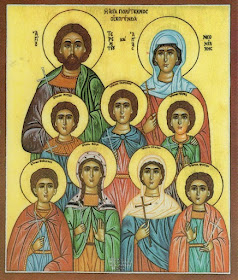 Apolytikion in the Third Tone
Bound together by natural bonds, and clothed with the might of faith, you walked the path of martyrdom with your seven children., O holy Martyrs Terence and Neonilla, pray that those who honor your contest may receive forgiveness of their sins.
Kontakion in the Fourth Tone
Today the memory of the Martyrs, is bringing gladness to us all. Let us fervently ask them for healing, for they obtained this grace from the Spirit, to heal the infirmities and sickness of our souls.
John at 11:55:00 AM
Share
‹
›
Home
View web version