Homily on the Resurrection Apolytikion in the First Tone 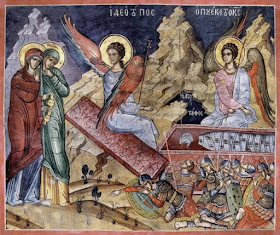 By Metropolitan Hierotheos of Nafpaktos and Agiou Vlasiou
The incarnation of the Son and Word of God is a great mystery, which in theological language is characterized as a mystery of the Divine Economy.
It is called a mystery of the Divine Economy, because it clearly shows God economized to save humanity. He did not do it to punish humanity nor to satisfy divine justice as western theologians call it, but with His love and philanthropy. He received a body subject to mortality and suffering, without sin, and He became a spiritual physician, spiritual medicine and spiritual hospital.
The Resurrection Apolytikion of the first tone presents the third day resurrection of Christ. It says:

When the stone had been sealed by the Jews, and the soldiers where guarding Thine immaculate Body, Thou didst rise on the third day, O Savior, granting life unto the world. Wherefore, the Hosts of the Heavens cried out to Thee, O Life-giver: Glory to Thy Resurrection, O Christ. Glory to Thy kingdom. Glory to Thy economy, O only Lover of mankind.

This Resurrection Apolytikion has many spiritual meanings. Some of these will be highlighted.
After the death of Christ on the Cross, Joseph of Arimathea asked Pilate to give him the Body of Christ, which, after the decision, he wrapped it in a clean sheet and placed it in his own new tomb. The Chief Priest and Pharisees asked Pilate to order for the tomb to be guarded until the third day so His Disciples would not steal it and say to the people that He resurrected on the third day, as He Himself proclaimed. Therefore, Pilate gave them guards to secure the tomb and they placed a large stone at the tomb.
This incident is described in the Resurrection Apolytikion we chanted today. The tomb was sealed by the stone and the Roman soldiers guarded the immaculate Body of Christ. Yet, Christ emerged from the "sealed tomb," and He entered the place where the Disciples were where the "doors were shut." The Son and Word of God is of one essence with the Father and the Holy Spirit, but the Body of Christ also, by virtue of the hypostatic union of the divine and human natures, became homotheos (equal to God). This is the great mystery of the Divine Economy. Thus, Christ gave life to the world, He gave another perspective and another meaning to our life.
The Angels marveled when they saw these events. What was their marveling for? They knew that the Son and Word of God was the true God who is united with the Father and the Holy Spirit, but now they see that the Body of Christ is also a source of the uncreated glory of God, submitting, of course, to mortality and corruption.
Thus, they sang hymns to the glory of His Resurrection, the glory of His Kingdom, which is His divinity, and the glory of His Economy. The Angels who glorified Christ when He was born in Bethlehem, now also glorify the Risen Christ, because the Body of Christ is homotheos, casting off His mortality and suffering.
All this shows that Christ is the only Lover of mankind, for He loves people in a unique way. Today many people present themselves as philanthropists, with outward manifestations of love, but when such actions hide the passions, especially death, this is not philanthropy, but misanthropy. Whatever is philotheo (for the love of God), is also philanthropic (for the love of people).
This unique philanthropy of Christ we also can live within the Church which is the resurrected Body of Christ. Despite the mistakes done by members of the Church, the Church is the Body of the Risen Christ and remains unto the ages. Christ sanctified the Church and it is immaculate. We who are sinners remain in the Church in order to be sanctified by it and not to sanctify it nor to save it. The Church has no need of a savior; we have need of a savior. To the resurrected Christ belongs glory unto the ages of ages.
Source: Translated by John Sanidopoulos.
John at 10:11:00 AM
Share
‹
›
Home
View web version