The Wonderworking Icon of the Venerable Laurentios in Nea Ionia 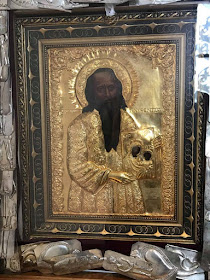 In the Chapel of the Venerable Laurentios, which is inside the Metropolitan Church of the Holy Unmercenaries in Nea Ionia, a northern suburb of Athens, is kept an old and wonderworking icon of the Venerable Laurentios, who is celebrated by the Church on March 7th. This icon was brought to Nea Ionia in September of 1914 from Asia Minor by Georgia Kallou. She had originally placed the icon in a chapel next to Omorfokklisia in Athens. There crowds of pious believers would come daily to venerate the Holy Icon, and many miracles were reported through the intercessions of the Venerable Laurentios.
In a letter to Georgia Kallou, the keeper of the Holy Icon, from the Ecclesiastical Council of the Church of the Holy Unmercenaries in Nea Ionia (7/8/1967), it states that because the chapel was private and to avoid the impression of exploiting the Holy Icon, the Archdiocese of Athens considered it appropriate to seal the chapel. However, in order not to deny the right of the Christians to venerate the wonderworking icon, the owner gave it to the Church of the Holy Unmercenaries of Nea Ionia, so that those who wish to freely venerate it could do so and become recipients of its wonderworking grace.
The crowds followed the wonderworking icon to its new home, so on 31 August 1970 a chapel in the southern aisle of the church was consecrated to the Venerable Laurentios of Salaminos by Metropolitan Nicholas of Halkidas. On the 8th of December that same year, the Holy Monastery of Panagia Phaneromenis in Salamina, where Venerable Laurentios lived in asceticism, gave the sacred head of the Saint to the chapel to be kept there in Nea Ionia. His body remains in the monastery in Salamina.
Venerable Laurentios was granted the gift to work wonders and miracles both during his lifetime and after. Among the many reported in our days at his chapel in Nea Ionia are the following. A 19 year old boy from Kalogreza with advanced septicemia had his foot healed. Another girl from Kalogreza was healed from being mute. A 10 year old child from Chalandri was healed of a tumor in his head. And in Saframpoli an incurable disease of the hand was healed for a young boy.