Saints Mark, Jonah and Bassa of the Pskov Caves

Saints Mark, Jonah and Bassa are venerated as the founders of the Pskov Caves Monastery.
It is not known exactly when the first hermit monks settled by the Kamenets stream in the natural caves of the hill, which the local inhabitants called “the holy hill.” The monastery Chronicle presents an account of eyewitnesses, hunter-trappers from Izborsk nicknamed Selishi: “We came with our father to the outlying hill where the church of the Mother of God is now, and heard what seemed to be church singing. They sang harmoniously and reverently, but the singers could not be seen, and the air was filled with the fragrance of incense.”
Of the first Elders of the Pskov Caves Monastery only Mark is known by name, who is said to have come from the Kiev Caves Lavra. The Chronicle says of him: “In the beginning, a certain Elder was living at the Kamenets near the cave. Some fishermen saw him by the three rocks above the cave of the Most Holy Theotokos Church, but they were unable to discover who he was, his lineage, how and from whence he came to this place, how long he dwelt there, or how he died.” 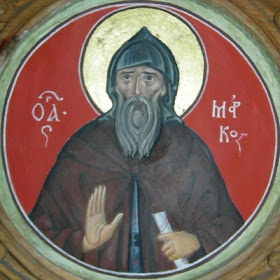 The second abbot of the Pskov Caves Monastery is identified as Elder Mark in the monastery Synodikon. Saint Cornelius (Feb. 20) doubted the veracity of this inscription and ordered that the name be removed from the Synodikon. Suddenly he became grievously ill and it was revealed to him that this was his punishment for ordering the name of Saint Mark to be stricken from the monastery diptychs.
After begging forgiveness at the grave of the Elder Mark, Saint Cornelius restored his name. When the Cave Church of the Dormition of the Most Holy Theotokos was dug out and the burial caves expanded, the abbot Dorotheus found the grave of Saint Mark in a state of neglect, but his relics and clothing were preserved.
In the year 1472, the peasant Ivan Dementiev cut down the forest on the hill. One of the felled trees rolled down the hill, uprooting another tree from the ground. The slide opened up the entrance to a cave, over which was the inscription: “The cave built by God” (There is a tradition that Saint Barlaam, a fool for Christ, frequently came to the cave and wiped out this inscription, but it miraculously reappeared every time). 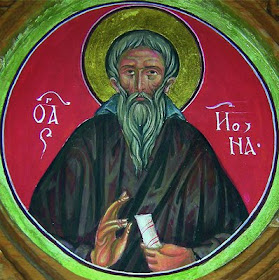 The priest John (nicknamed “Shestnik”, meaning "newcomer") came to this holy spot, where the first ascetics prayed. He was a native of “the Moscow lands” and served as priest at Iuriev (now Tartu) in “a right-believing church, established by people from Pskov” and dedicated to Saint Nicholas and the Great Martyr George. He and the priest Isidore spiritually nourished the Russians living there. Father John also had a wife named Maria and two sons. 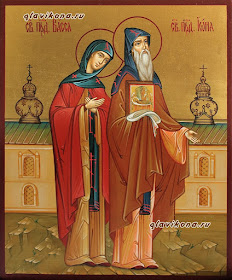 In 1470, Father John was compelled to flee to Pskov with his family because of persecution by the German Catholics, who were executing Orthodox priests. When he learned of the martyric death of Saint Isidore (Jan. 8), Father John decided to settle in the newly-appeared “cave built by God” around the year 1470, so that there, on the very boundary with the Livonians, he might found a monastery as an outpost of Orthodoxy. Meanwhile, he left his wife and sons in the house of Ivan Dementiev, awhile he himself began to build a church in the mountain west of the cave.

Soon his wife fell ill and died after receiving monastic tonsure with the name Bassa. Her righteousness was evidenced immediately after her death. Her husband and her spiritual father buried Saint Bassa (Mar. 19) in the wall of “the cave built by God,” but at night her coffin was “taken from the ground by an invisible power of God.” 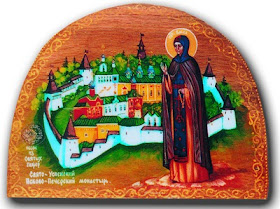 Father John and Saint Bassa’s Father Confessor were upset, thinking that this had occurred because they had not done the complete Service for the Departed. So they sang the funeral service a second time, and they buried the body again. In the morning, however, it was found above ground. Then it was clear that this was a sign from God, so they dug Saint Bassa’s grave on the left side of the cave. Shaken by the miracle, John became a monk with the name Jonah and devoted himself even more fervently to spiritual struggles. 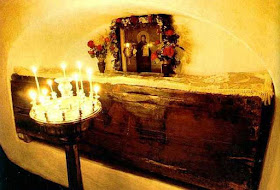 He dug out the cave church and built two cells on pillars, then petitioned the clergy of the Pskov Trinity Cathedral to consecrate it, but they decided not to do so at the time “because of its unusual location.” Then Saint Jonah sought the blessing of Archbishop Theophilus of Novgorod. 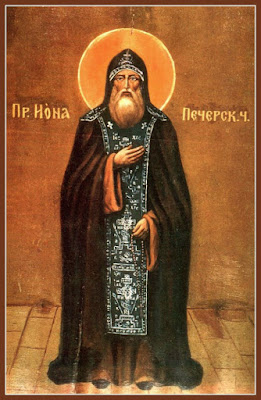 The date of the consecration of the cave church is regarded as the official date of the founding of the Pskov Caves Monastery. Saint Jonah labored at the Pskov Cave Monastery until 1480, then peacefully fell asleep in the Lord. Upon his death they discovered a chain mail coat on his body. This was hung over his grave as a sign of his secret asceticism, but it was stolen during a German invasion. 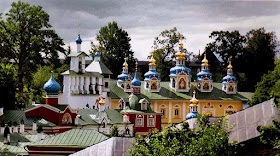 The relics of Saint Jonah rest in the Caves beside the relics of the Elder Mark and Saint Bassa. Once, when the monastery was besieged, the Livonian knights wanted to open the lid of Saint Bassa’s coffin with a sword, but fire spurted forth from the coffin. Traces of this punishing fire may still be seen on the coffin of Saint Bassa.